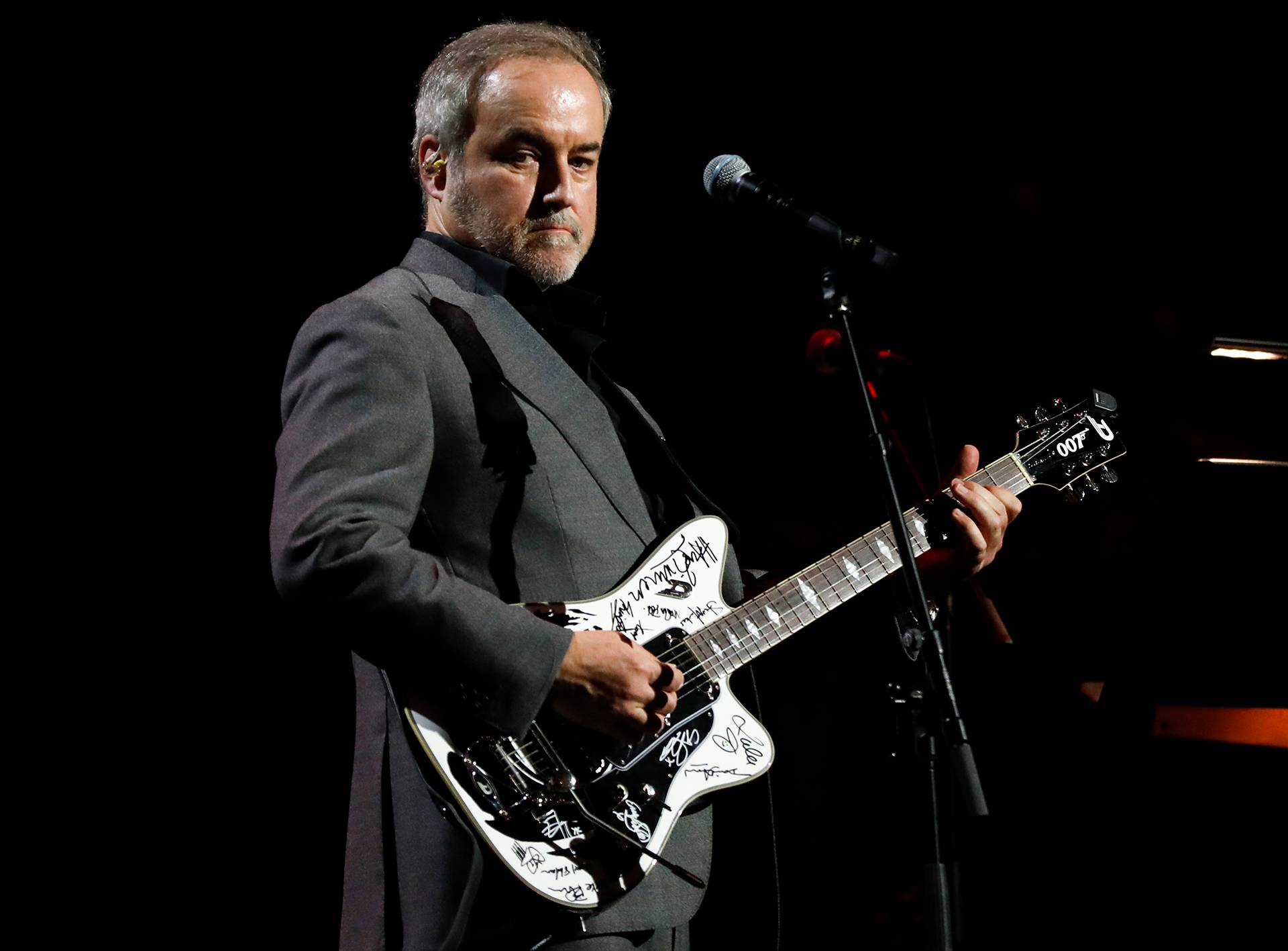 David Arnold is widely regarded as one of the UK’s leading film composers and his contribution to the James Bond series has been immense. He is the first composer to score more than one Bond film since John Barry. Among his early credits are Stargate (1994), Independence Day (1996), for which he won a Grammy Award, and Godzilla (1998). His television work includes the series Little Britain and Sherlock, the latter earning him and co-composer Michael Price a Creative Arts Emmy. He has composed the music for five films in the 007 franchise — Tomorrow Never Dies (1997), The World Is Not Enough (1999), Die Another Day (2002), Casino Royale (2006) and Quantum Of Solace (2008) and he recently curated and produced The Sound of 007 In Concert, a celebration of James Bond’s iconic music.

With such a wealth of great songs and music from which to choose, how did you approach the arrangement of The Sound of 007 in Concert?

We tried to avoid putting one singer on after another. You’ve got 25 movies — so that’s 23 songs without Dr. No and On Her Majesty’s Secret Service — and alongside those we also had 25 feature films’ worth of music to choose from. So we tried to find the pieces that meant we can go on a journey; it doesn’t necessarily mean that we start at Dr. No and finish with No Time To Die.

So it was more about finding the right mood and atmosphere…

Yes. Imagine that this were a Bond movie. We’d have an explosive start, the great amazing stunt at the front, the thing that gets you into the movie. Then you’d have a lower key explanation and then a series of musical set pieces that hopefully finish in a satisfying climax. It’s not chronological. It’s a celebration of the music overall, and the people who have written it and recorded it.

What in your opinion defines a great Bond song?

Over the years, the idea of what is a Bond song has changed. If you put ‘Live And Let Die’, ‘The Spy Who Loved Me’ and ‘You Only Live Twice’ in a line, they’re all completely different songs, stylistically, but they are all Bond songs. Once they’ve been in a Bond movie they are Bond songs. There is a core of attitude that binds them all together. It’s not style or necessarily big strings and trumpets, although that’s an easy shorthand. There is an attitude and that is what is present in all Bond songs. That’s what defines them.

Shirley Bassey was the first to say yes and if you are doing an official Bond concert and she is singing ‘Diamonds Are Forever’ and ‘Goldfinger’, then whatever else you do, you have got a great Bond concert. She is the lynchpin and when you put her, the Royal Philharmonic Concert Orchestra and the Royal Albert Hall together, then nothing speaks Bond music more. Many artists and writers are sadly no longer with us, but we have a blend of original and some new artists to perform, but the star is really the song. The performance is crucial, but it is really a celebration of the music.

How pleased are you that The Sound of 007 in Concert supported Nordoff Robbins and the BRIT School?

The BRIT School is non-fee-paying and is full of people who otherwise might not get a cat in hell’s chance of looking at a career in music or the arts. They have visited me at my studio and I work with them, telling them the truth about the industry, the boring essential stuff as well as the interesting stuff. What is fascinating is the breadth of expression from people who have very diverse backgrounds, both social and racial; and music is a particularly good leveller as it lives solely by the brute force of a person’s talent.

What was your first experience of a Bond film growing up?

One of my first experiences of Bond was at the Royal British Legion’s children’s Christmas party in Luton. I was about seven or eight years old. They wheeled in this 16mm projector with a rented copy of You Only Live Twice and they erected a screen the size of a kitchen table and brought out a single mono speaker. I had no idea what any of these things were. I was close to the projector and all of a sudden you saw the incredible pre-title sequence, the spaceship being consumed by a bigger spaceship, Bond getting machine- gunned to death before being resurrected in full Royal Navy Commander uniform before the titles, with that amazing song sung by Nancy Sinatra. Within about ten minutes all this stuff had happened and I remember thinking it was the most amazing thing I’d ever seen, and had ever heard.

Do you remember how the music affected you?

I think it was the music more than anything that caught my imagination. If you listen to those first ten minutes, the song, the score, the Bond theme, they are all such iconic pieces of music and pieces of cinema. From that point on I became incredibly intrigued by, and interested in, the series. The very first film came out the year I was born so my whole life has been living alongside this character. When I was asked to do my first Bond film, it was like being asked to touch the hem of God’s frock!

I think there are several different versions of the way in which I arrived at doing my first Bond film, and even I am not sure which one is true anymore! I had been making the ‘Shaken and Stirred’ record, which is covers of James Bond songs. George Martin introduced me to John and he was very complimentary and nice about the record and we became friends. At the same time I also sent some of the tracks to Michael G. Wilson and Barbara Broccoli at EON because I wanted to do something that would meet with their approval. At the same time I had just won a Grammy and was someone who was literally on EON’s doorstep. I was a life-long Bond fan who had already recorded stuff which sounded maybe the way the producers wanted to go, and I had dealt with a couple of big studio movies that had done very well. So I think it was a slightly easier decision for Michael and Barbara to make with all those things in a line. But, certainly, having John give me the thumbs up didn’t hurt.

James Bond is not a character who talks about his emotions, so how important is the music in showing the audience how he feels?

There is a thing with film where they say, ‘Don’t say it, show it’. It’s the language of cinema in a way, the ability to tell a story without words if necessary. And music holds hands with the words that are spoken, with the action and the story, and it can take over each of those things and can become the mood or the intention or the celebration of whatever it is you are seeing on the screen. With Bond movies, you are intrinsically linked to this character and you want to like him; you want him to be okay and to defeat whatever the enemy is. The delivery of those things is satisfying to the audience. That’s the epitome of a hero: he delivers what he promises, and the music can help us expect it, to be worried by it, to be frightened by it and it can help us be excited and it can help us celebrate it.

There are many answers but what in your opinion has made Bond music so iconic?

Like few others, James Bond music appears to have made the leap from its source material to the outside world, like spaghetti westerns, for example. It’s a genre of its own, and it’s entirely of John Barry’s making. He decided stylistically to create something that is so completely definitive of the character and of the series. Whenever you do a spy movie you kind of have to sound like that. And I think the positioning of the song has been a big part of it; the way the song has been able to be taken out of the movie and used as a device external to the film. You had Shirley Bassey on American TV performing ‘Goldfinger’ when it came out. Matt Monro would have been on TV doing ‘From Russia With Love;’ Adele would be on TV all around the world doing ‘Skyfall’. And Bond songs have always sounded like Bond songs. They’re classic and timeless, even when they doffed their caps to the era. The sound of a-ha and Duran Duran had a flavour of the ’80s but you wouldn’t listen to them now and think of them as ’80s tunes. They feel fresh now and it’s the same with ‘Diamonds Are Forever,’ ‘Goldfinger,’ or ‘You Only Live Twice’. They’re great songs, arranged in a way that doesn’t place them in a time that has gone. They live in their universe, sound-wise and stylistically.

Do you have a favourite Bond song or title track?

My favourite title sequence is On Her Majesty’s Secret Service, which isn’t a song at all, but it’s an incredibly powerful, potent, and unmistakably Bond piece of music. It’s just a killer tune with a dark, driving malevolence that I haven’t heard in any other piece. And because it is without lyrics it can only be about the vibe of the movie and the intention of James Bond. When I hear that, it makes me feel what James Bond is about to do. It is dark, violent, and unstoppable.

What is your favourite iteration of a Bond song in a film?

‘You Only Live Twice’ has an instrumental version and when you hear it you realise it was written for strings above all else. They made a song out of it, of course, but it feels to be such a string piece. It is so elegant, moving, and beautiful – and the polar opposite of ‘On Her Majesty’s Secret Service’. They’re both extraordinary pieces.

And your favourite score?

David Arnold spoke with Will Lawrence for The Sound of 007 In Concert Brochure.