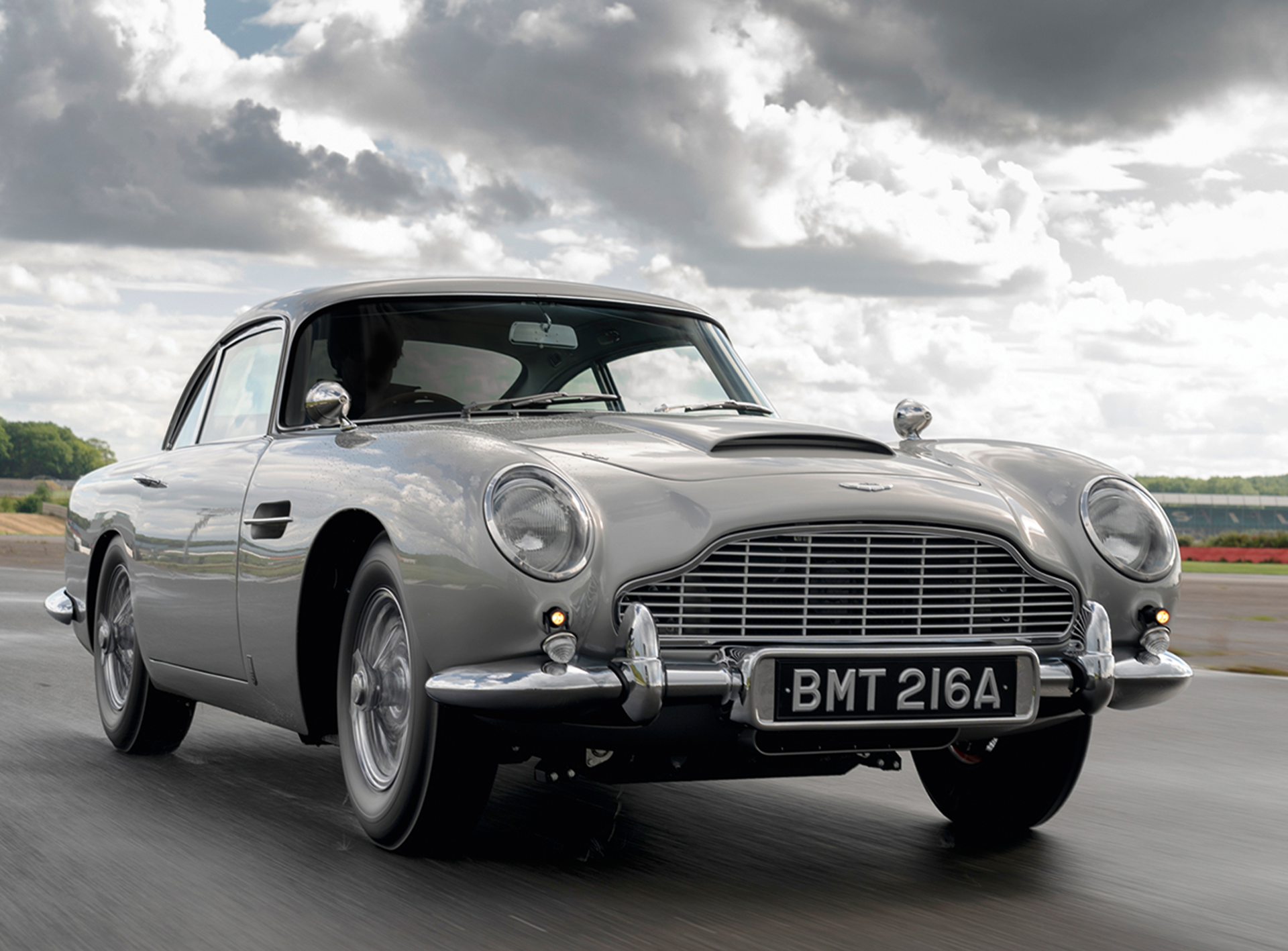 Let’s get something clear right from the off, there is absolutely nothing on earth like driving the Aston Martin DB5 Goldfinger Continuation. After 90 minutes at the wheel of a test drive that takes us from Stoke Park (the setting of course for Bond and Goldfinger’s legendarily testy golf game) to Aston Martin’s factory at Newport Pagnell, 007.com can confirm that it’s a car that elicits extraordinary outbursts of affection not just from the driver but in pretty much everyone who sees the car in action in real life. Afternoon drinkers sat outside a bucolic village pub pause their pints and wave as we glide by, an elderly gentleman doffs his cap, passengers take snaps from passing cars, truck drivers honk their horns and a cyclist coming in the opposite direction is so overwhelmed that he punches the air and whoops with childlike joy as he whips past us. The car is a celebrity itself and everyone seems to recognise it as “the James Bond car”. Ironically bearing in mind its enormous cachet as “the most famous car in the world”, less than 900 DB5’s were actually ever produced between 1963 and 1965 with the last one rolling off the production line at Aston Martin’s Newport Pagnell factory some 55 years ago.

Following on from the incredibly successful DB4 GT Continuation in 2017, the 25 DB5 Goldfinger Continuation models recently started production in association with EON, with the car’s array of extraordinarily impressive and fully-operational gadgetry created under the stewardship of long-time 007 special effects supremo Chris Corbould, who has worked on 15 Bond films since 1977’s The Spy Who Loved Me.

So what exactly do you get for your two and three quarter million pounds (plus taxes)? Well, certainly nothing in the way of mod-cons. No power steering, bluetooth or even airbags – the car isn’t road legal (the model that 007.com got to drive is a specially adapted test car). But it does have electric windows and a boot full of star power. For starters there’s a rear smoke-screen delivery system, front and rear revolving number plates, a simulated oil slick delivery system (it uses a dye to make the water look like oil), twin front-mounted .30-calibre Browning machine guns (along with the tyre slasher, unsurprisingly also simulated), a bullet resistant pop-up rear shield (that was genuinely tested on a firing range), front and rear battering rams, rear smoke machines and once you’re in the cabin you’ll find the classic radar screen map (which simulates tracking one of Goldfinger’s henchmen with the radar beep sound effect taken from the film), a phone in the driver’s door, a weapons tray under the driver’s seat and of the course the legendary flip-top gear change knob that, sadly, doesn’t fire a working ejector seat – but at least the removable panel above it is indeed cut out from the roof. The extraordinarily powerful urge to deploy some of the gadgets as you bomb along is only resistible because all the special effects gubbins have been disabled until the car is stationary. At that point you can simply use the handy remote that comes with the vehicle to show off all its show-stopping secrets. And you will want to show them off.

The nearly-three-million-pound question is of course, what’s it actually like to drive this ultimate collector’s toy? Well, it’s a driver’s car in the truest sense of the meaning; it demands your unbridled attention and your absolute respect at all times. Corners will take slightly more toll on the forearms than you might be used to from driving modern cars; the driving position is best described as “cosy” for anyone approaching the six foot mark (though the cabin itself is breathtakingly beautiful) and the 4.0-litre naturally aspirated inline six-cylinder engine is no match for today’s road-tuned performance cars. None of which really matters though of course. Aston Martin have a true-ism that states that their drivers don’t use their cars to go from A to B but rather A to A, that is, they use them for the pleasure of the drive. And 90 minutes in the front seat of this beautiful piece of automobile artistry is ample proof of that.

Each of these cars is meticulously hand crafted by the world’s most respected and experienced Aston Martin engineers and creators, a process that takes around 4,500 hours to complete. It’s an extraordinary application of modern production techniques to a hands-on classic car build – an original DB5 was put though a millimeter by millimetre CT scan to identify historic micro-irregularities in the engine block and chasis – meaning the new car is vastly refined and improved using cutting edge technologies alongside traditional hand tools and techniques that you’d have seen being employed in this workshop back in the early sixties.

It was Bond production design legend Sir Ken Adam who is credited with coming up with the idea of having 007 drive Astons, and he was part of the original team who approached (the initially wary) Aston management with the idea of the cars being used in the films – they later relented and lent the production team two cars to play with. Special effects supervisor John Stears was tasked with turning one of the Astons into Bond’s full loaded vehicle of choice. Stears said the first thing he did was make the hole for the ejector seat: “I marked it out, and taped off the roof of this beautiful car. I looked at it, went away and had a cup of coffee, came back, and got the drill, and drilled the hole. It was terrifying.” Director Guy Hamilton claimed the revolving number plates were his input, saying it would be “absolutely marvellous to collect a parking ticket and then juggle the number plate and drive off.”

There is a clear line from the work these Bond film legends put in to that one screen-used DB5 more than half a century ago to this new Aston Martin DB5 Goldfinger Continuation. Love, ingenuity, passion and even perhaps a streak of madness have been poured into both cars and you can’t help thinking they’d approve of this very special piece of Bond history.