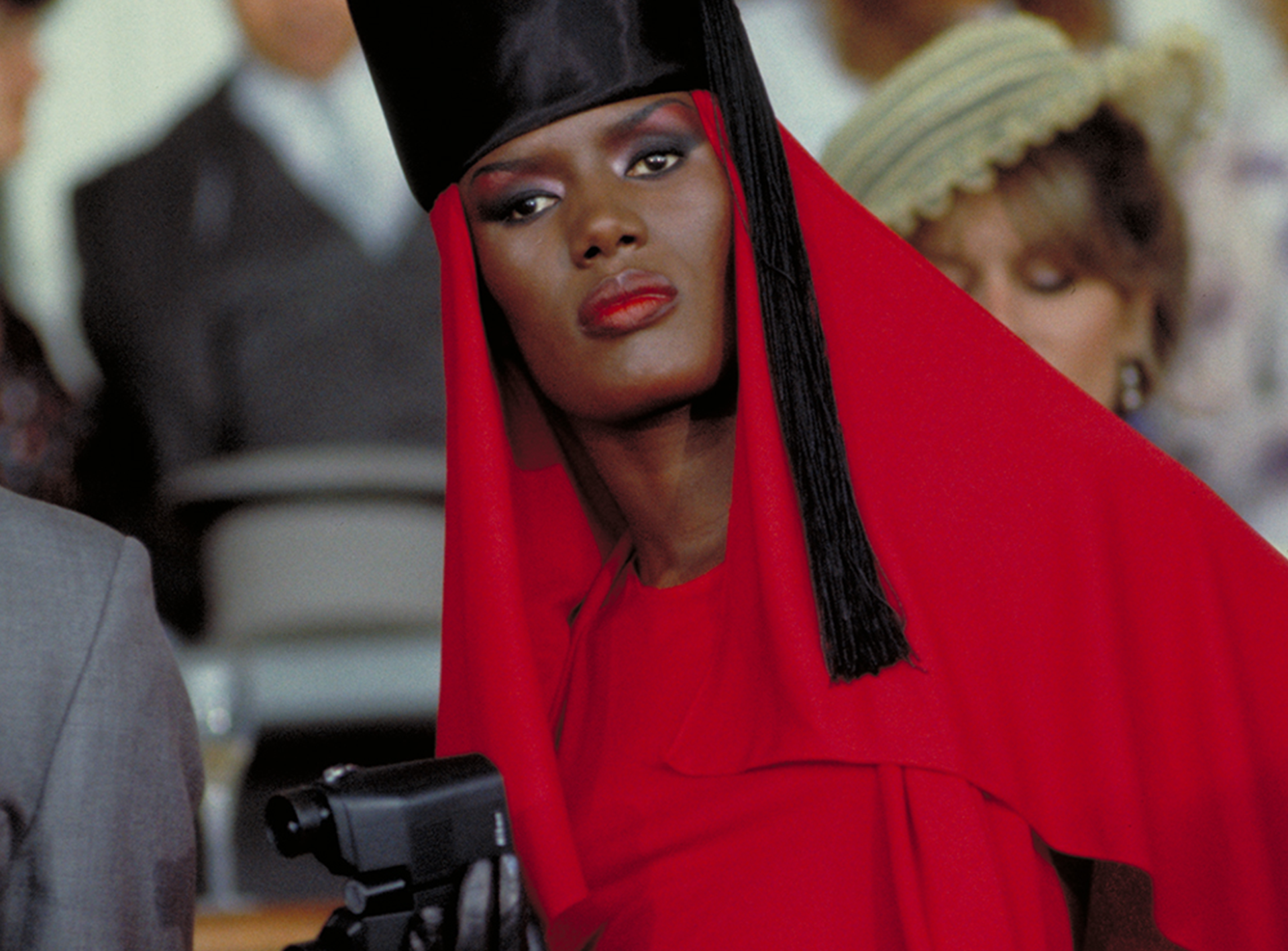 Stylish and deadly, May Day (Grace Jones) is the bodyguard and lover of millionaire Max Zorin (Christopher Walken) in A View To A Kill (1985). She has an eye for high fashion — we first see her in a striking red suit trying to tame Zorin’s horse, Pegasus — her ensemble is the result of a collaboration between Grace Jones’ friend, Paris designer Azzedine Alaia and costume designer Emma Porteous.

May Day is strong enough to lift a man over her head and is the perfect partner for Zorin: both share a near complete lack of regard for human life coupled with a manic personality. May Day’s main role in Zorin’s life is killing his opponents. She murders French detective Aubergine (Jean Rougerie) with a poisoned barbed butterfly prop. Bond (Roger Moore) gives chase up the Eiffel Tower but she takes a death defying leap from the top and skydives onto a wedding boat. 007 gives chase by car but she manages to evade him.

The pair meet again at Zorin’s chateau where May Day assassinates Bond’s MI6 cohort Sir Godfrey Tibbett (Patrick Macnee) while he is taking a Rolls-Royce through a car wash. She later takes part in an attempt to drown Bond in the same car and later kills 007’s CIA contact Chuck Lee (David Yip) in San Francisco.

Yet, when Zorin unleashes his plan to set off a double earthquake, flood Silicon Valley, and monopolise microchip production, May Day is forced to reconsider her allegiances. After she dutifully chases Bond and Stacey Sutton (Tanya Roberts) into a mine, Zorin floods the caverns while she is trapped inside. When May Day realises Zorin has left her to die, she helps Bond disrupt the millionaire’s scheme. Using her upper body strength, she puts the bomb in a cart to send it outside the mine. When the brake suddenly activates, blocking the cart, May Day stays on board to hold the brake open, knowing she will die when the detonator explodes. Bond implores her to save herself but she simply tells him: “Get Zorin for me.”

Zorin escapes in an airship from which he watches her exit the mine on the cart. She throws back one last defiant stare. As Zorin falls to his death following an encounter with Bond on top of the Golden Gate Bridge, her dying request comes true.