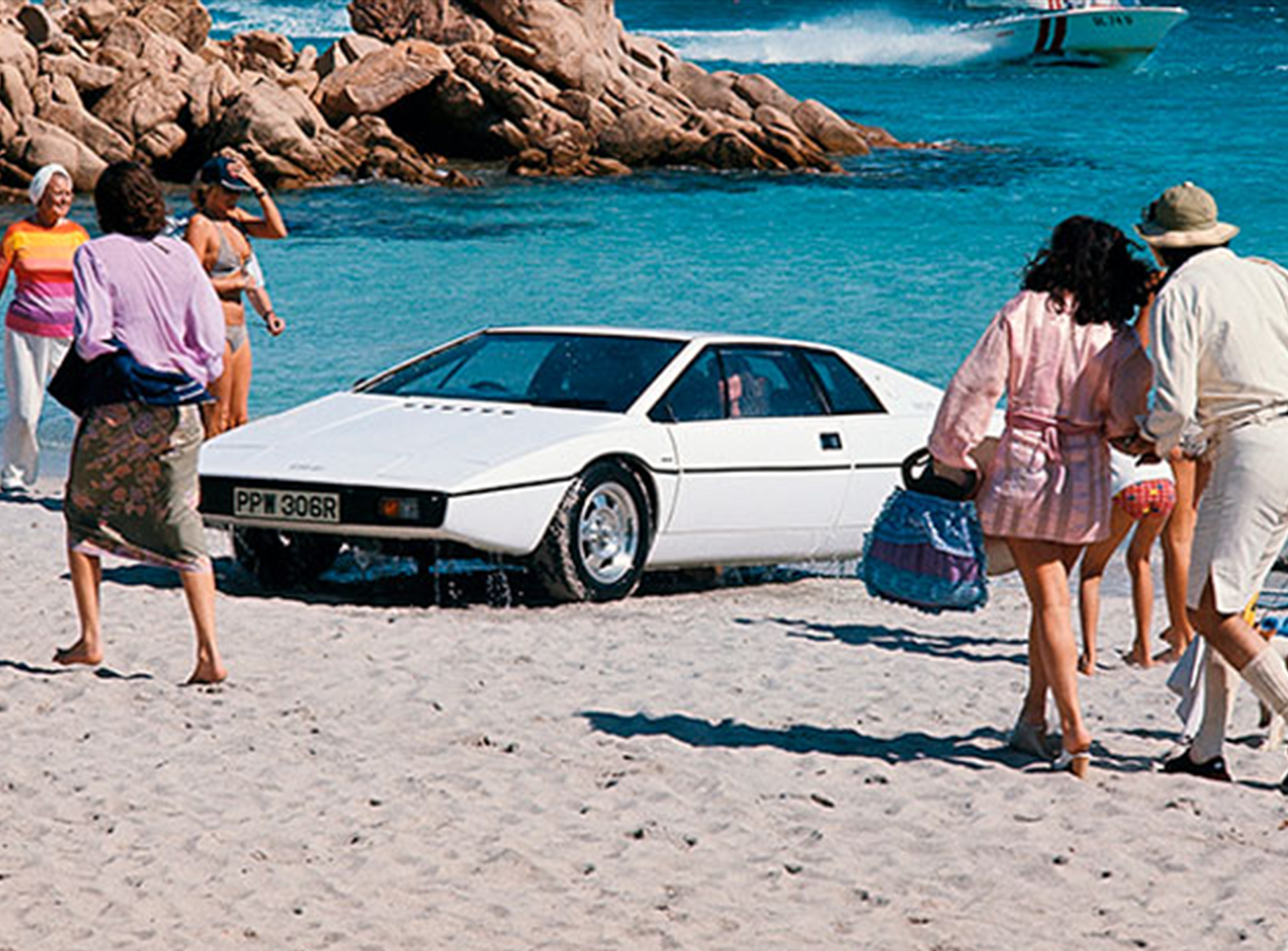 One of the iconic cars  from the Bond films, the Lotus Esprit S1 from The Spy Who Loved Me (1977) was small in size — 419 cm long, 185.4cm wide and 117.7cm from ground to rooftop — but huge in stature. Q’s modifications not only equipped it with cool gadgets and heavy firepower but also with the capability to transform into a submarine. None of this sacrifices the Esprit’s speed or ability to handle the tightest of corners.

Bond (Roger Moore) picks up the Lotus in Sardinia during his joint mission with Russian agent Anya Amasova (Barbara Bach) investigating shipping tycoon Karl Stromberg (Curt Jürgens). When Stromberg’s killers chase the pair down mountain roads, Bond uses a cement sprayer hidden behind the rear number plate to blot out the assailants’ car window. To avoid a helicopter gunship, Bond drives the Lotus into the sea.

The Lotus now deploys its full range underwater conversion system; rudders and fins emerge from the sides, a propeller replaces the back bumper, blackened windows block out glare and a periscope rises from the roof. To destroy the hovering helicopter, Bond launches an air-to-sea missile using the car’s gearshift. As Stromberg’s divers attack the car, 007 deploys front-mounted torpedoes, an ink cloud and a mine. 007 re-configures the car back into a land vehicle, emerging from the sea to the surprise of some startled tourists.

Work on the sequence started in Nassau in August 1976. Lotus supplied seven shells for the filmmakers to adapt. One of the cars was sent to Perry Submarines to be motorised, the others were converted to represent the various stages of the transformation. To achieve the thrilling moment where the Lotus drives into the sea, the empty shell of a car was launched into the water by an air cannon.

For the underwater sequences, a miniature Lotus was guided through the clear waters of the Bahamas on ultra-thin wires. But the sequence was not without its dangers. As Visual Effects Supervisor Derek Meddings recalled, “It was quite amusing because a couple of times when we were filming underwater, we nearly got run down by the motorised Lotus.”

The finale of the sequence, with the Lotus emerging on a crowded beach, was shot at Capriccioli in Sardinia. Assistant Director Victor Tourjanksy played one of the surprised bathers. In a neat running joke, Tourjanksy also had guest appearances in Moonraker (1979) and For Your Eyes Only (1981).

You can see ‘Wet Nellie’ at Bond In Motion http://londonfilmmuseum.com