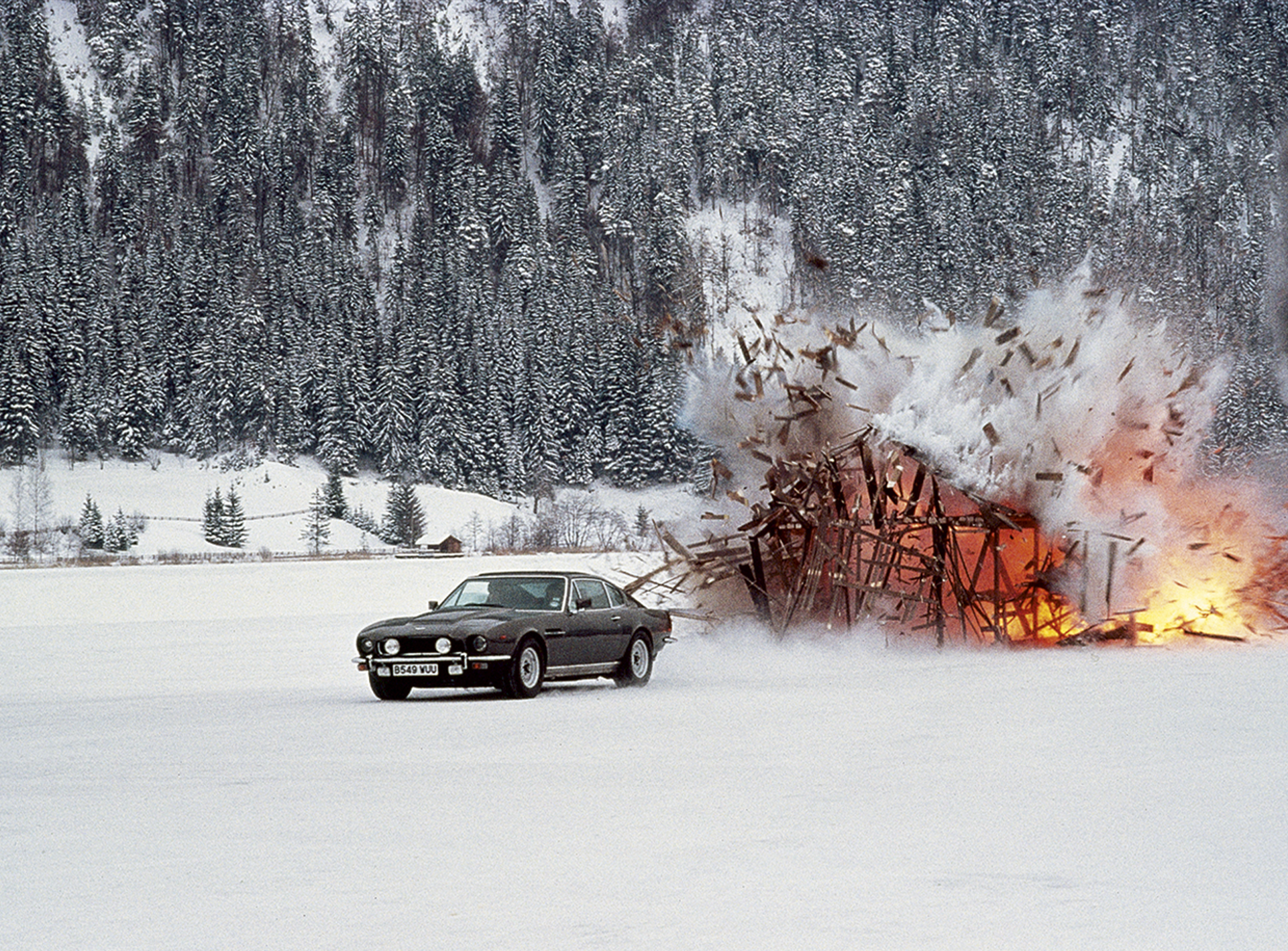 The principal car in The Living Daylights (1987), the Aston Martin V8 saw the series renew its relationship with the iconic car manufacturer. After Bond’s use of the Aston Martin DBS in On Her Majesty’s Secret Service (1969), the filmmaking team turned to the Lotus Esprit for The Spy Who Loved Me (1977) and For Your Eyes Only (1981). Despite the iconic status of the submersible Lotus, the filmmakers decided a new Bond — Timothy Dalton — needed a new vehicle so the decision was made to return to Aston Martin with the V8. But for The Living Daylights, the V8 would be winterised for a high-speed chase around the Czech-Austrian Border.

The V8 comes into play when Bond and Kara Milovy (Maryam d’Abo) flee to Vienna, pursued by both the KGB and the Czechoslovakian Police. As they approach the border into Austria, Bond deploys a number of Q Dept gadgets to give him an advantage. When a police car pulls alongside, he uses laser beams shooting from the front hubcaps to cut the chassis off a police car (“salt corrosion” quips Bond as the chassis skids along without wheels). A police band scanner radio informs 007 the Czech law enforcement are reversing a lorry across the road to block Bond and Kara’s escape. Bond presses a button to unleash a “few optional extras”: guided by a heads up display on the windshield, he fires a pair of heat-seeking missiles hidden behind the fog lights, blowing up the juggernaut before the V8 powers through.

Tanks and armoured vehicles carrying troops force Bond off-road, driving through a boathouse, taking the wooden building with him as he speeds onto a frozen lake before leaving the structure behind just before it is hit by a shell. When an explosion blows the tyre clean off, Bond makes a huge circle on the lake, the rim cutting a hole in the ice, the chasing police car slowly sinking into the icy water. With no front tyre, Bond rolls out retractable outriggersthat act as skis and ice tyres for further grip. With the police closing in, Bond fires up a jet engine booster rocket, concealed behind the rear licence plate, and leaps to safety into a forest before crash-landing in the snow. Pressing the self destruct button, Bond and Kara leave the V8 just before it blows up.

It might have exploded in The Living Daylights but the Aston Martin V8 will return with Daniel Craig at the wheel in BOND 25.