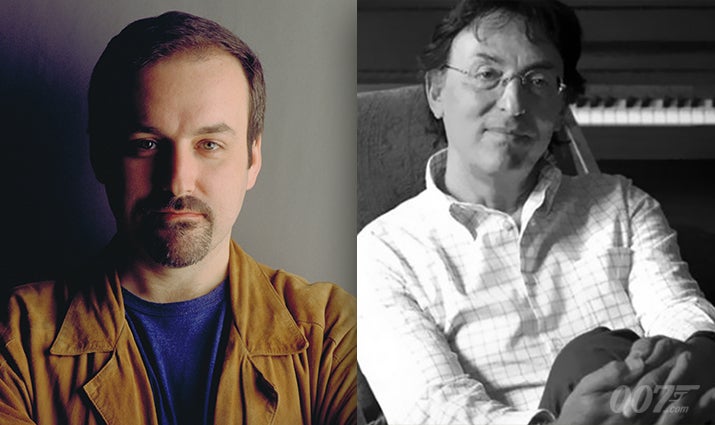 We asked you for your questions for David Arnold. We chose the best ones and put them to the Bond composer…

Q Travis McClain: Are there any specific instruments you try to find a way to use in your scores? If so, what are they and where would we notice where you’ve sneaked them in?

A David Arnold: I love the sounds of deep low strings… cellos, low violas and low violins… it’s a velvety rich dark sound, and alongside dark trombone chords and French horns gives you that foreboding but sensual Bond sound. I also love the sound of harp and alto flute. Most notably, all of these sounds are in “Night At The Opera” from Quantum Of Solace. The flute/harp combination is something John Barry made famous in his work for the Bond films that he scored.

Q Ricardo Elorza Bobadilla: What turns any score into a Bond movie score beyond the use of the theme here and there? Thank you.

A David Arnold: You’ll get a million different answers to this question… but for me it’s a sense of danger, mystery, an undercurrent of violence and a slightly perverse sense of romanticism. To represent those elements in a musical form should get you close to the sound of a Bond score.

Q Sebastian Johnson: What was your favourite scene to score?

A David Arnold: I liked the scene between Bond and Elektra (in The World Is Not Enough) when they’re in the bedroom and being tender with each other… probably because I liked the theme I came up with for her and it played well in this scene. “A Night At The Opera” from QOS and “Surrender” from Tomorrow Never Dies were highlights.

Q Matthew Soberman: Not counting your own, what’s your favourite Bond theme?

A David Arnold: On Her Majesty’s Secret Service.

Q Andres Quiroga: What made you approach Chris Cornell for the song “You Know My Name”? That was a match made in heaven.

A David Arnold: We wanted a singer who sounded like Daniel Craig looked and moved. Chris has the power, grit and, when needed, sensitivity to welcome the audience into the world of Casino Royale.

Q Richard Grant: What piece of music that you wrote for the Bond series are you proudest of?

A David Arnold: I like quite a lot of cues over the years, it’s difficult to say which  is a  favourite… but I suppose as it was the theme that got me in to the Eon/Bond family in the first place… I’ll go for “Surrender” from Tomorrow Never Dies.

Q Juha Mäkinen: Who is you favourite composer, in other words a “hero to you”?

A David Arnold: John Barry… who else????

Oscar-winning Lyricist Don Black worked on the theme songs for Thunderball, Diamonds Are Forever and Tomorrow Never Dies among others. Here, he answers your questions….

Q Wingless Angel: Is there anyone who hasn’t sung a Bond theme that you wish would, or had?

A Don Black: Bette Midler because she has this kind of a wink with everything she does. There’s something sexy and witty which are great ingredients for a Bond theme.

Q Nicolás Suszczyk: What was the hardest song to write? The one that took hours and hours to find the words?

A Don Black: Probably The Man With The Golden Gun because John Barry wasn’t that happy with his tune and he changed it quite a few times, which was very unusual for him.

Q Bond Blog: What’s in your opinion the best Bond song ever and why?

A Don Black: This is really a personal thing. I was managing the singer Matt Munro when we got the assignment for From Russia With Love. The song is lovely and every time I hear it, it brings back so many memories for me. I remember Lionel Bart who wrote it, coming round and singing it in my ear. I have so many great memories associated with that song.

Q Marcus Eastop: Do you have any anecdotes about any of the artists you have worked with – for instance Dame Shirley Bassey?

A Don Black: Well I’ve got hundreds! The thing about Shirley Bassey is that she doesn’t sing songs she lives them. When Terry Wogan introduces a Shirley Bassey record on the radio he says, “She doesn’t just sing songs, she bites lumps out of them”.  I love Shirley Bassey and the way she attacks everything. She’s an absolute joy to work with and you know you’re going to get a sensational performance whatever she does.

Q Justin Whitby: Which is your favourite Bond lyric of all the ones you wrote and why?

A Don Black: Diamonds Are Forever… I’ve always thought a Bond song should be provocative and sensual. There’s something about the song that seduces you into it.

Q Clayton Hodson: What past music or artists have inspired your work and how so?

A Don Black: All the greats like Sinatra, Streisand. I was brought up to love all the great song writers like Cole Porter and Irving Berlin, The Great American Songbook always influenced me.

Q Stephen Perry Williams: What did you use for inspiration for your lyrics, for example, did you read the book or the script, or did you get to see footage from the movie?

A Don Black: I don’t really, I like to get a sense of it – I like someone to tell me what it’s all about in a sentence. I just need to know the nuts and bolts of it, I often don’t read the script I just want to get straight to the heart of the story.

A Don Black: You’ve got to over write in a way, you’ve got to lure people into it. The best songs are the ones when you want to know what happens next, you hear the opening line and it’s a story. With a lot of songs you don’t need to do this, you just have to make people feel good, but with a Bond song the emphasis on the song should be seduction to gradually lure the listeners in.

Q Vasilios Sotiropoulos: In the lyrics to Thunderball, who do you talk about as being ‘He’? Is it Bond, No. 1, or Largo?

A Don Black: I was thinking about Bond, thinking ‘He always runs while others walk’. In my mind it was James Bond, but I guess it could work for Largo too.