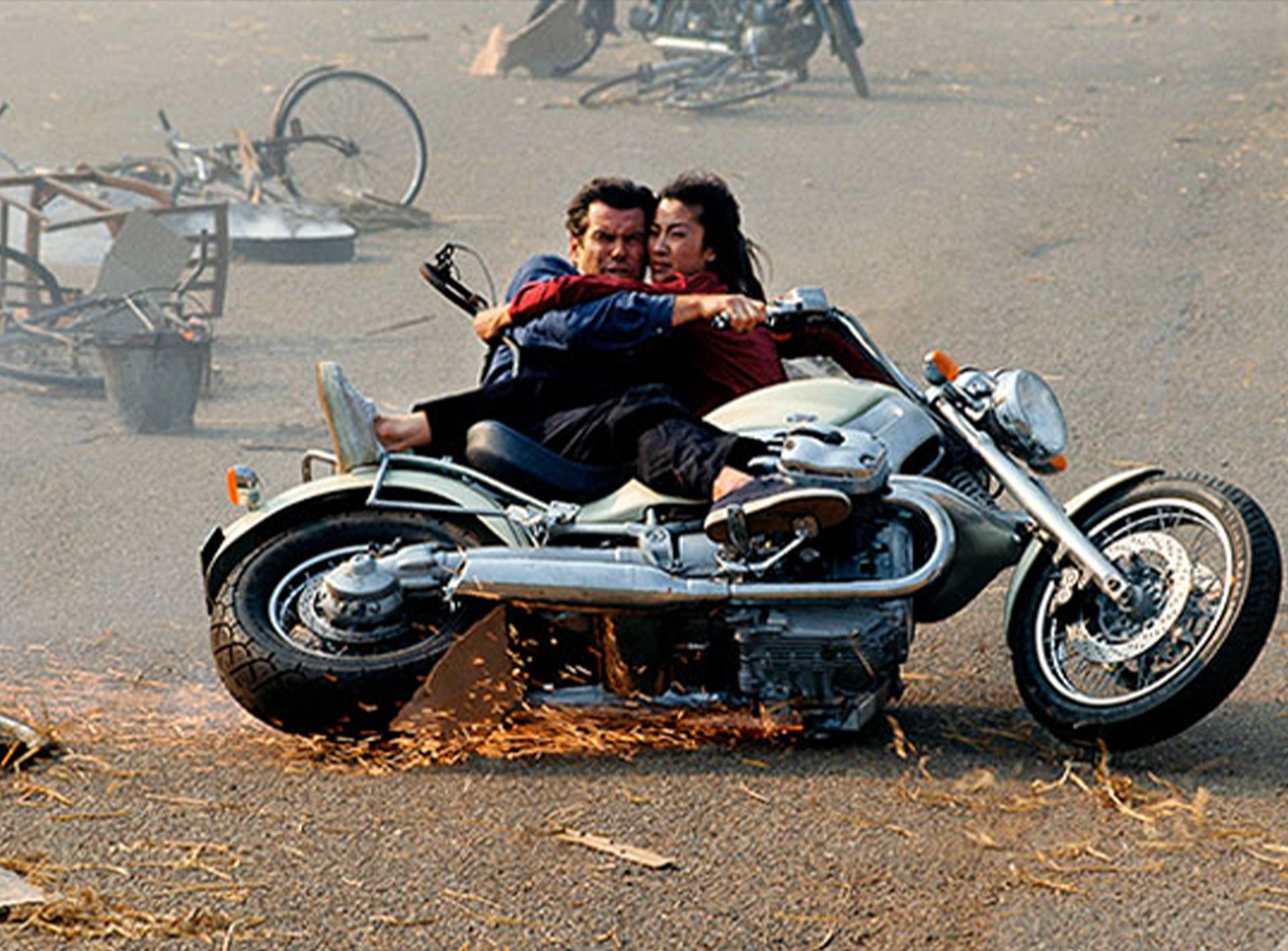 The 18th James Bond film and Pierce Brosnan’s second outing in the role was made under an intense deadline: a December 1997 release date set out by the studio.

GoldenEye writer Bruce Feirstein came up with the most modern of villains, a media mogul, encapsulated in a simple pitch: “Words are the new weapons, satellites, the new artillery.” In an early draft of the script, the news mogul was named Elliot Harmsway (he became Elliot Carver) and in later drafts the film had the working title ‘Tomorrow Never Lies’. It featured key elements from the finished film, including Harmsway’s (Carver’s) stealth boat and 007’s remote controlled BMW.

The final story sees Bond investigate media baron Elliott Carver (Jonathan Pryce) who is looking to provoke a war between China and the United Kingdom by sinking the British frigate HMS Devonshire in Chinese waters via a Stealth ship. Bond has 48 hours to discover the truth behind the sinking to prevent the two countries going to war. After tailing Carver to Germany, where he seduces Carver’s wife Paris (Teri Hatcher), Bond travels to South China to explore the wreck of the Devonshire. He meets Wai Lin (Michelle Yeoh), a Chinese agent who is working the same case. The pair are captured in Carver’s HQ but escape and team up to stop Carver firing the decisive missile at Beijing, exposing his ‘invisible’ ship to the Royal Navy.

Hong Kong action legend Michelle Yeoh was cast in the role of the Chinese agent  —Wai-Lin — very much an equal to Bond, not a sidekick. Jonathan Pryce, perhaps best known at that point for Miss Saigon, was recruited to play the power hungry mogul. Teri Hatcher, star of TV show Lois & Clark, signed on to play Paris, an old flame of Bond’s and now Mrs. Carver.

With Pinewood and Leavesden Studios completely booked up, the filmmakers, as with GoldenEye, created a new studio space, this time in a former warehouse in Frogmore, England. With the film now retitled Tomorrow Never Dies, the shoot began in January 1997 with Second Unit Director Vic Armstrong capturing the pre-credit Arms Bazaar sequence in the French Pyrenees.

Armstrong later orchestrated a spectacular car chase inside Brent Cross Shopping Centre car park doubling for a multi-storey car park in Hamburg. To achieve the idea that Bond is controlling the car via a touchpad on his cell phone, special effects supervisor Chris Corbould’s crew reconfigured four BMW 750iLs to be driven by a hidden stunt driver on the back floorboard, steering the car by watching video monitors. In the four-minute sequence, over 17 cars were used.

To meet the December 9 premiere date, composer David Arnold composed and recorded the score in sections during production. Arnold’s score felt modern while honouring the musical tradition of the series. Sheryl Crow wrote and performed the title song while k.d. lang sung the end title song ‘Surrender’, very much in the vein of a Shirley Bassey Bond classic.

Following Cubby Broccoli’s passing on June 27 1996, the film would be the first Bond film to carry the credit  ‘Albert R. Broccoli’s EON Productions Presents…’ (It previously said ‘Albert. R Broccoli Presents). The film proved to be both a fitting tribute and a huge success, earning $333 million worldwide. It also cemented Pierce Brosnan in the role, redefining Bond once more as the series approached a new millennium.