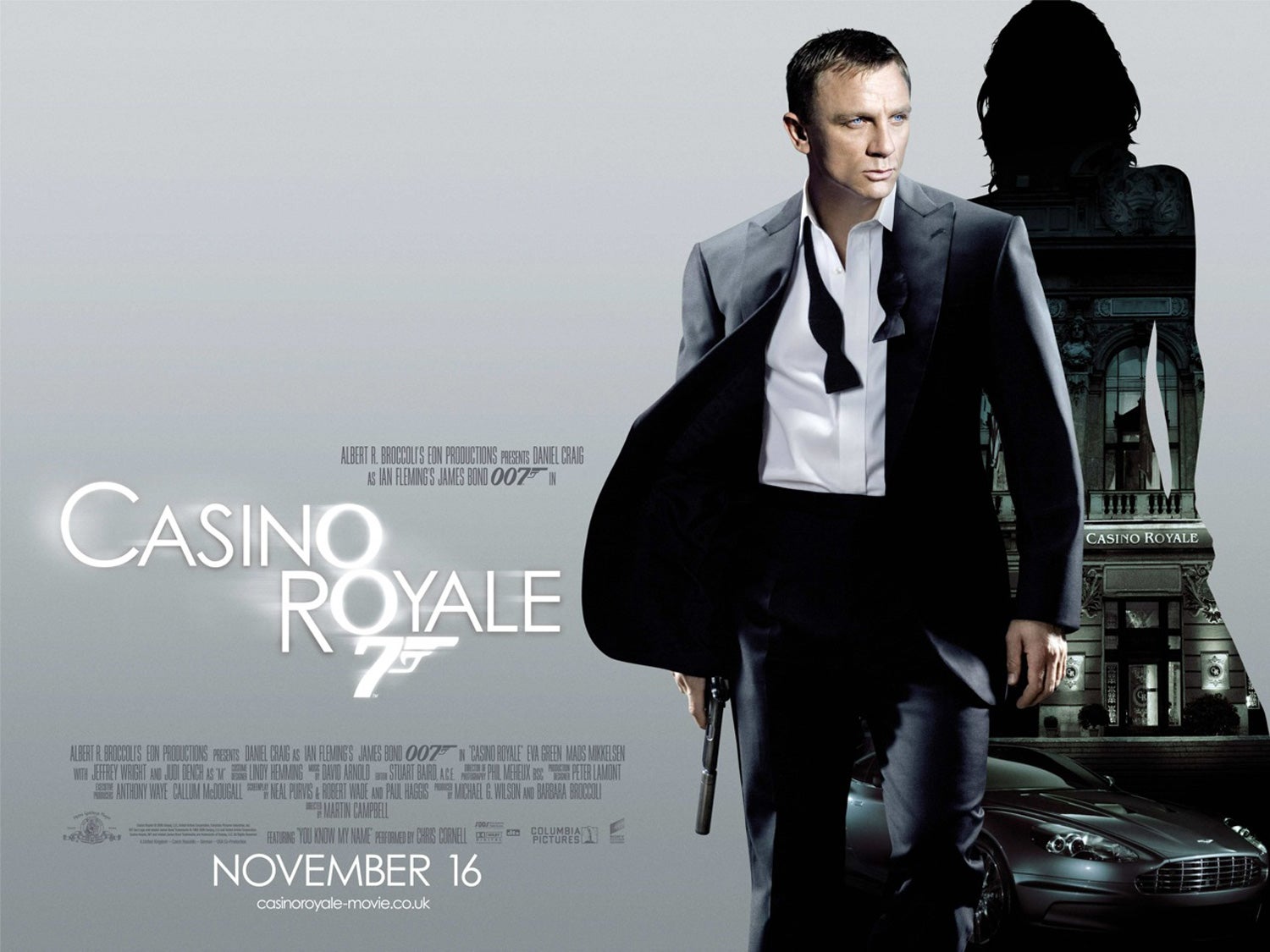 After becoming a 00 agent, James Bond hunts down a bomb maker in Madagascar, which leads him to shady financier Alex Dimitrios in the Bahamas, and then to a plot to blow up the prototype Skyfleet airliner at Miami Airport. By preventing the bombing, Bond leaves criminal banker Le Chiffre on the verge of bankruptcy – Le Chiffre lost his clients’ money by betting on Skyfleet’s failure on the stock market. Le Chiffre sets up a high-stakes poker game in Montenegro to win back the lost money. Bond attends with Treasury agent Vesper Lynd and wins, but Le Chiffre kidnaps Lynd and tortures Bond in an attempt to regain the winnings. They are saved when Mr White, a senior figure in terrorist organisation QUANTUM, kills Le Chiffre. However, Lynd is secretly working for White and has made a deal with him to save Bond’s life. In love with Lynd, Bond resigns from MI6 and travels to Venice with her. There, he realises she has betrayed him and stolen the money. After a gunfight with QUANTUM’s men in a collapsing Venetian villa, Lynd lets herself drown because she cannot bear the burden of her guilt. Bond pursues White and shoots him in the leg, then introduces himself; “The name’s Bond, James Bond.”

Special permission was granted for Bond and Vesper’s yacht (the Spirit 54) to sail along the Grand Canal between the Accademia and Rialto bridges, marking the first time in many years a yacht has sailed the Grand Canal

The effects team created an exterior Venetian house model, built to one-third scale, to shoot the building collapsing into the Venetian canal. The same computer system used to control the three story dilapidated interior set also controlled the model’s hydraulics so Corbould and his team could exactly replicate the motion of the interior set

Producer Michael G. Wilson has a cameo as a corrupt Montenegrin police chief

The Guinness World Record for the most cannon rolls in a car is seven and achieved by stuntman, Adam Kirley, in an Aston Martin DBS, during filming at Millbrook Proving Ground, Milton Keynes

Bond reveals the recipe for his favourite martini, ‘The Vesper.’

The bomb maker Mollaka, whom Bond pursues through the Nambutu Embassy, is played by Sébastien Foucan, the co-creator and one of the foremost practitioners in the art of Parkour, also known as “Free Running”

Oscar-winning costume designer Lindy Hemming dressed Vesper in red and made sure that none of the extras wore any red, so that we could see her as Bond catches glimpses of her through the crowds in Venice. It’s a small homage to Don’t Look Now