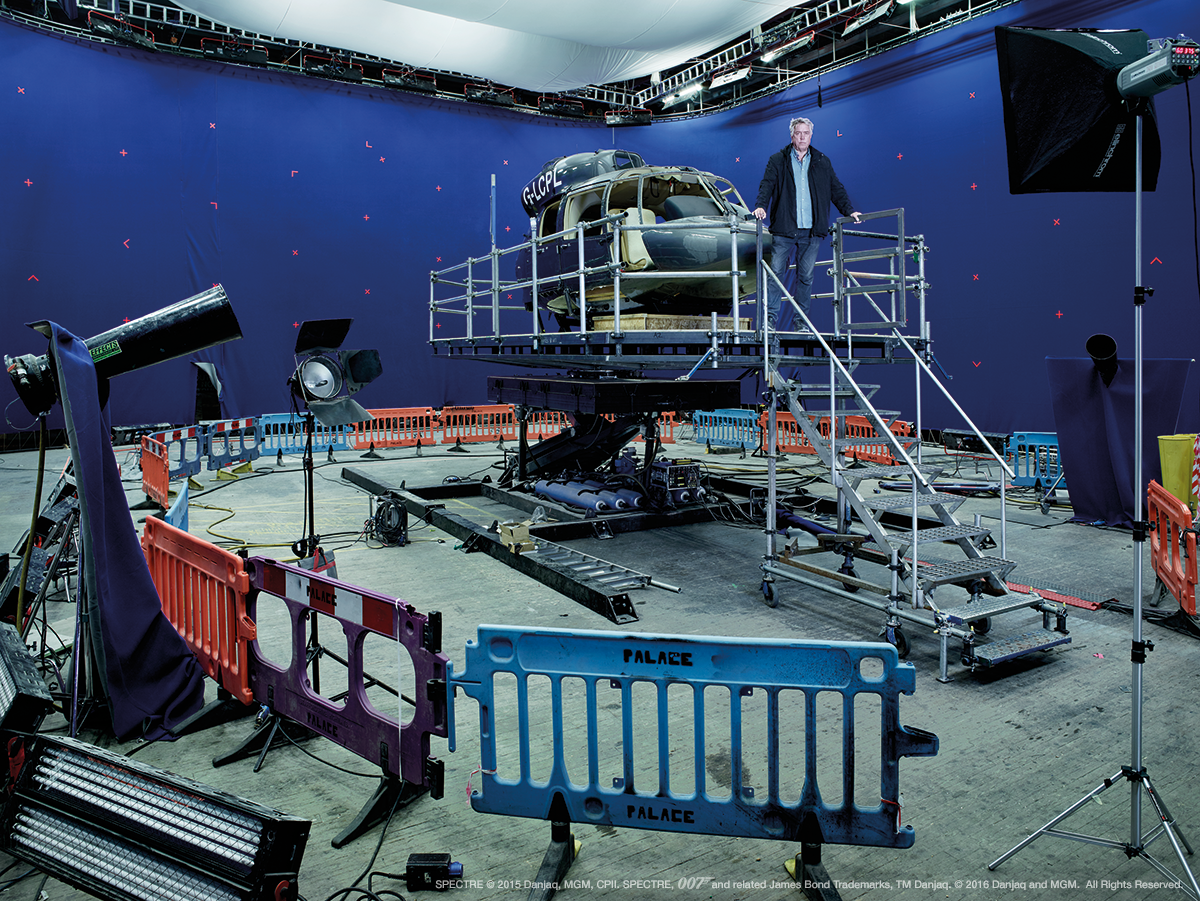 As the Visual Effects Supervisor, what does your role cover?
I am responsible for the execution and technical design of all the Visual Effects in the movie. I have to closely liaise mainly with the Director, but also production designer, cameraman and editor, in order to make sure that our work blends in with everyone’s else’s take of the movie. I also delegate and monitor the work to the various companies that supply the VFX. There were six on this due to the workload of 1500+ VFX shots and a very short post production time, 12 weeks, where we do most of our work.

What’s the difference between your role and the Special Effects Supervisor?
The Special Effects Supervisor’s responsibility is primarily all real, practical effects on the sets and locations, from bullet hits, fires, explosions, smoke and rigs, involving the actors and stunt guys. My role is more keeping an eye on and suggesting ways of shooting shots and sequences where we will be adding CGI elements afterwards in post production. There is a big crossover though when we want to use miniatures. I come from a miniature effects background but because they are usually huge scale on a Bond film, (we call them ‘Maxitures’ or ‘Bigatures’) there are huge rigs and effects required. So the Special Effects Department usually get as heavily involved as VFX.

What were the challenges involved with the opening Sequence in Mexico City?
There were loads. From adding another 10-20 thousand CG extras to extend the crowds beyond the 1500 that we had on location. Then the opening sequence where we had to seamlessly blend together six shots photographed in different locations into one big tracking shot ending with Daniel Craig and a lady friend going into a bedroom from a Mexico hotel location to a Pinewood set piece, then out the window back to a Mexico City rooftop location. We never really lost sight of him, which normally helps with the blend-wipes. Thanks to the attention to detail by our Steadicam operator, Sam chose a take were their body positions, camera distance and motion matched from one cut to another. Then there’s the helicopter fight, which had most of our work on the movie.

What involvement did you have in the collapsing building sequence in Mexico?
We were involved in every shot up to the gunfight but the bulk of the work for us was immediately after the suitcase explosion where we tilt up following a crack rising up the building’s face as seen from Bonds POV. The whole image is CGI. Then as Bond starts to run the whole facade begins to topple towards him, again fully CGI but the actual impact is a blend where we took the timing of the impact, done by Chris Corbould’s SFX team on a huge rig on the Pinewood backlot, with a stunt double for Bond. Everything else after is a combination of minimal set pieces as Bond falls through the building with a huge overlay of CG rubble, debris dust etc.

How do VFX and SFX work together?
On these kind of movies you have to work very closely. Visual effects, special effects and stunts have to be successfully combined to create believable action scenes. It usually starts with a stunt or practical effect that needs a bit of invisible CG Sellotape to blend the lot together. The great thing is that it all starts in the real world and has to have a ‘real world’ feel, so if our stuff looks lightweight and animated, then we’ve failed.

Talk us through the fight on the helicopter and how VFX were used.
We were told a few weeks before we started shooting in Mexico that we couldn’t do the more dangerous helicopter stunts, barrel rolls etc, over the Zócalo Square due to the altitude in Mexico City. I had a feeling that was coming so I’d always had a backup plan of shooting these shots over an airfield elsewhere with the stunt helicopter, then replacing the airfield putting a full CG square, crowd and Mexico City below the helicopter, with motion-captured CG doubles fighting inside, which is what we did. We went this route rather than shooting an empty square and putting in a CG helicopter because neither Sam nor myself felt you would get believable composition and movement in the shots from that approach. All the interior and close shots of the helicopter fight were shot in a dummy helicopter fuselage on an SFX gimbal in blue-screen stage at Pinewood. Our job was to put in the spinning backgrounds of Mexico City. Because they would have reflected all of the lights, camera crew and blue-screen, I had them take out the windows and bubble canopy on the dummy helicopter. CG versions were added in later by us with reflections of the sky and city to help sell the illusion.

How involved were you in the explosion in Morocco that earned the Guinness World Record?
The entire sequence once Bond was in the crater was shot on a flat desert plain near the real crater mountain exterior you see earlier as he approaches, with minimal sets and flats for the actors to react to and it gave the camera crew something to lineup on. Everything else buildings, domes, crater walls were created by us. The explosion was mainly real and full scale created by Chris Corbould and his team. Basically there were minimal buildings in those shots, as they would be added in post and roto-scoped in and around the engulfing detonations. Chris used a lot of high explosives and thousands of gallons of gasoline to get the sequential, advancing explosion effect. It was a very tricky shot for us, blending the buildings into and behind the explosions.

How did you go about MI6’s destruction?
I’d considered miniatures for the MI6 building demolition and the collapsing building in Mexico, but the elaborate camera move that had originally been planned (simplified a little later) for the opening sequence ruled out miniatures for me. Also, the sheer scale of the MI6 building didn’t really lend itself to miniatures. The problem with a collapsing model is it has to be structurally strong enough to support itself but weak enough to break into thousands of bits of debris. That’s very difficult to do on a miniature scale. I’ve never seen a miniature building collapse believably without looking like a load of Lego bits. So we went with an entirely CG approach for its destruction.

What impact did filming at night in the centre of London have on the visual effects?
It was massive! Not only did we have to paint out movie lights that were coming into shots (very difficult as they’d flare across the lens), we had to create the foliage on the trees throughout London in the sequences shot April-May, look barren and wintry to match footage that had been shot earlier in the production in December the year before.

How do you go about filming something like the helicopter crash on Westminster Bridge?
This was shot on the 007 stage at Pinewood. It involved a full-scale prop helicopter flown on wires crashing onto a partial set piece of Westminster Bridge. Not only did we add CG rotor blades to the aircraft, but the entire environment. Whilst the bridge was built on the 007 Stage and an enormous translight put in place to depict the scenery either side. We had to extend the bridge, adding the whole of Westminster and police blockades at the ends of the bridge with flashing lights, all put in afterwards. Every single shot in that sequence where you see Daniel Craig, Christoph Waltz, Ralph Fiennes and Léa Seydoux has CG backgrounds added in. A lot of work!

What VFX sequence took up the most time and planning?
The opening shot and helicopter fight. We spent months pre-visualising both. The previs was most useful in demonstrating to Sam Mendes and Hoyte van Hoytema the DOP, the trickiness and potential problems in blending together shots that were shot in different locations months and continents apart.

Which Visual Effect in Spectre are you most proud of?
I think the opening continuous shot as it’s the most un-Bond like effects shot there has been, and I think it pleasantly caught a lot of people by surprise, and, the little CG mouse that comes out in the hotel room and ultimately runs into a hole in the wall revealing the secret hiding place that Bond has been looking for in Tangier. I’m very happy with that as most people can tell when they see a massive building collapsing in a city like London that it’s probably CG, but not necessarily a little mouse. Most people bought it as a real mouse!