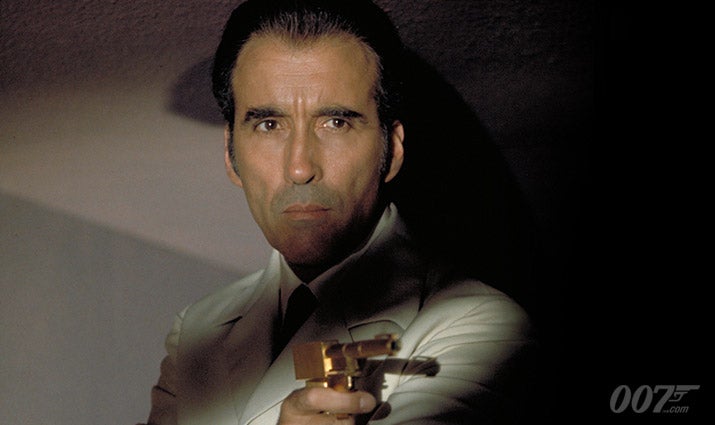 Sir Christopher Lee plays one of the most iconic Bond villains, Scaramanga in The Man With The Golden Gun. We asked for your questions to put to him and here’s what the great man had to say.

Q Joe McConkie: Sir Christopher Lee, what was it like working with Hervé Villechaize?
A He was a delightful man and very professional. He was also very amusing.

Q Simon Mortimer: How did you prepare for the role? You were so memorable and it has stood the test of time.
A You naturally read the script. You meet the Director, Guy Hamilton, and you discuss the best way of presenting the character, who was much more agreeable than the character described by Ian Fleming in his book. He was more civilized and had a very strong sense of humour.

Q Kade Bittick: What was your personal favourite scene to shoot in the film?
A I think when we all had lunch – Roger Moore, Britt Ekland and myself and it was during this meal that I suggested a one on one duel. I also said I liked Britt Ekland in a bikini; no concealed weapons. There was another scene that was cut which showed at the beginning how untrustworthy Scaramanga was because he claimed he only needed one bullet (to kill Bond). In it Roger Moore, 007, throws a bottle towards me behind the rocks and I use my one bullet to shoot it down – which makes Bond assume that I have no others. In fact, I had another bullet in my belt buckle, so I was able to reload the gun.

Q Montrose Patriot: What was it like to film in Phuket when the location was unknown to the Western world?
A Phuket was then an unknown little village. Our producer, the late Cubby Broccoli, had literally transformed some of the houses so they could be lived in by the cast and crew. That’s what makes a producer. He also flew in our meals by helicopter.

Q Craig Edwards: As a step-cousin of Ian Fleming did that make the role more attractive to you?
A In the book, The Man with the Golden Gun, the villain was in fact a very nasty piece of work who went around shooting at everything, including bottles in bars and harmless animals and birds. We were able to make Scaramanga a much more interesting character. He was charming, but lethal.

Q Harrison Lee Wilkinson: If you could have portrayed any Bond villain other than Scaramanga who would it have been and why?
A Ian Fleming and I used to play a lot of golf together down near Sandwich. One day before the first Bond was made, he asked me if I had read the book ‘Dr. No’. I said I had and enjoyed it very much. He said to me “I would like you to play Dr. No” and of course I was very thrilled with the idea. But Ian could be slightly forgetful and by the time he mentioned it to the two producers Cubby Broccoli and Harry Saltzman they had cast a fine actor, Joseph Wiseman, in the role.

Q Greg Templar: Did you and Sir Roger get on well?
A Roger and I have been close friends for 65 years. We have worked together a couple of times during that period but nothing on the scale of the Bond film. We keep in touch regularly and it is always a great pleasure to see him and talk to him, because we share many memories.

Q Louis Pitsch: How does playing a Bond villain compare to other villainous characters you have portrayed throughout your career?
A I don’t think one can make any comparison in this case. I have over the years played many dangerous and formidable characters. Some existed and others did not. Scaramanga was an invention of Ian Fleming’s and I have been told that he named the character after a school boy at Eton whom he disliked. Also, there is a naval dockyard outside Athens called Scaramanga and I have been there. So although in the film he is a fictional character there are reasons for him being called by that name. Incidentally, I remember asking many doctors about the third nipple and I was told that it was by no means unusual.