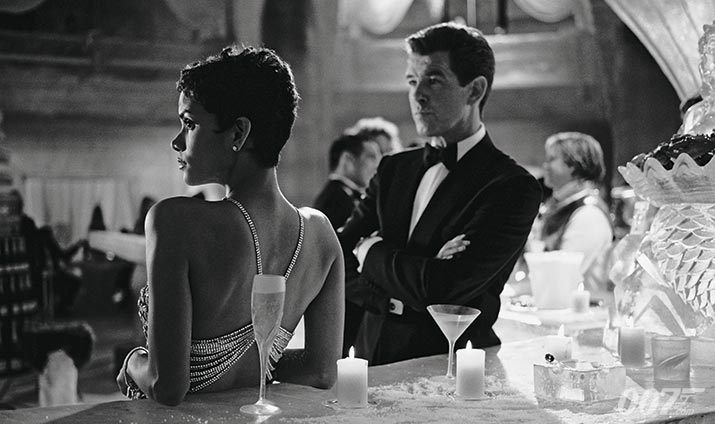 NSA agent Giacinta Johnson (Halle Berry), nicknamed Jinx because she was born on Friday 13th, teams up with James Bond (Pierce Brosnan) in Die Another Day (2002) to prevent Gustav Graves (Toby Stephens) from using his Icarus satellite superweapon to turn North Korea into a new superpower.

In Los Organos, Cuba, Jinx discovers that escaped North Korean terrorist Zao (Rick Yune) is secretly being treated at a clinic run by Dr. Alvarez (Simón Andreu), a DNA replacement therapy specialist. Emerging from the sea, Jinx catches Bond’s eye in a bright bikini and knife belt. Costume Designer Lindy Hemming on the design of the bikini: “We wanted to pay homage to the Ursula Andress bikini and we came up with this electric orange, very revealing and sexy bikini and a very beautifully crafted diving belt.”

After spending the night with Bond, Jinx assassinates Dr. Alvarez and makes a back-up disk of the files on his computer. She then programmes a cell phone bomb to destroy the clinic. After a failed attempt to assassinate Zao, she escapes by back diving 200ft into the sea and climbing onto a waiting powerboat.

Under the alias Miss Swift, Jinx travels to Iceland to investigate Gustav Graves, attending the unveiling of his Icarus satellite. Bond later rescues her from being burned to death by a diamond-cutting laser and saves her from drowning inside Grave’s melting Ice Palace.

Jinx and 007 join forces to disable the Icarus satellite weapon. The pair enter North Korea on switch blades and then parachute near an airfield where they sneak aboard an Antonov transport plane, from which Graves and three North Korean generals plan to oversee Icarus’s destruction of South Korea’s defences. After the plane depressurises, Jinx flies the plane into the beam of the Icarus satellite, destroying the satellite’s control mechanism. In a battle with Miranda Frost (Rosamund Pike), Jinx manages to overcome the double agent by stabbing her in the heart with her throwing knife, which is ironically stuck in the Art of War book.