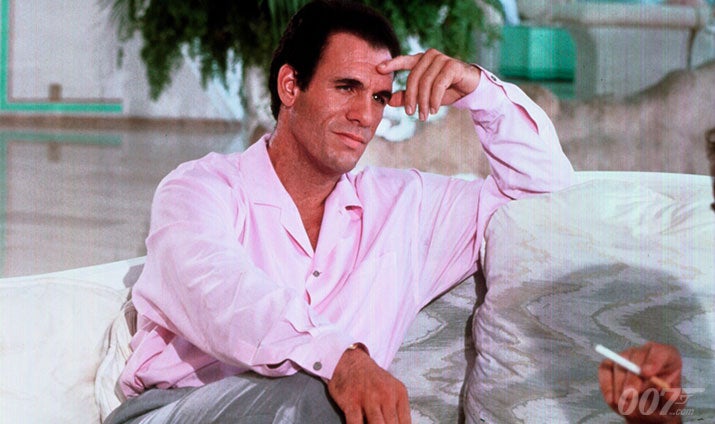 Franz Sanchez is a drug baron who believes loyalty is more important than money, Bond learns to exploit this view to his advantage. Calculating and cold-blooded — it is no coincidence that he keeps a chameleon as a pet — Sanchez has government officials in his pocket in countries ranging from the US to Chile. Operating out of the small nation of Isthmus, he uses the coded sermons of televangelist Professor Joe Butcher to sell his cocaine and launders the profits through his casino. Sanchez’s nefarious activities mean he is facing 139 felony counts and 936 years in prison if caught by the US government.

A rare visit to the US by Sanchez sees the net draw tighter. Drug Enforcement Agents, led by Felix Leiter and including Bond who is acting as an observer, capture the drug lord by hooking a cord to his plane as he attempts to escape into international airspace. Sanchez bribes DEA agent Ed Killifer with $2 million to spring him from US custody, undertaking an audacious escape from a high security transit. Sanchez wreaks revenge on Leiter by having his new bride Della murdered and torturing Felix by lowering him into a shark tank. He leaves Leiter maimed but alive to send out a warning to those who cross him.

Sanchez learns a major cocaine shipment to the US has gone wrong and the payment stolen by a mysterious stranger, unaware that 007 is behind the intervention. Using Sanchez’s own money, Bond arrives in Isthmus City and offers his services as a killer for hire to Sanchez. He earns Sanchez’s trust after the latter mistakenly believes Bond saved him from an assassination attempt and begins to cleverly sow the seeds of distrust between Sanchez and his accomplices.

Bond manages to infiltrate Sanchez’s inner circle and uncovers his master-plan: a scheme with an Asian drug cartel smuggle huge quantities of cocaine by dissolving the drug in ordinary gasoline, transporting it by ocean-going tanker, and then converting it back to cocaine. In a spectacular chase, Bond destroys the tankers one-by-one, ending on a mano a mano battle with Sanchez. When facing a machete wielding Sanchez, Bond takes a cigarette lighter, a thank you gift from Felix and Della, and uses it to set fire to the gasoline-soaked Sanchez.