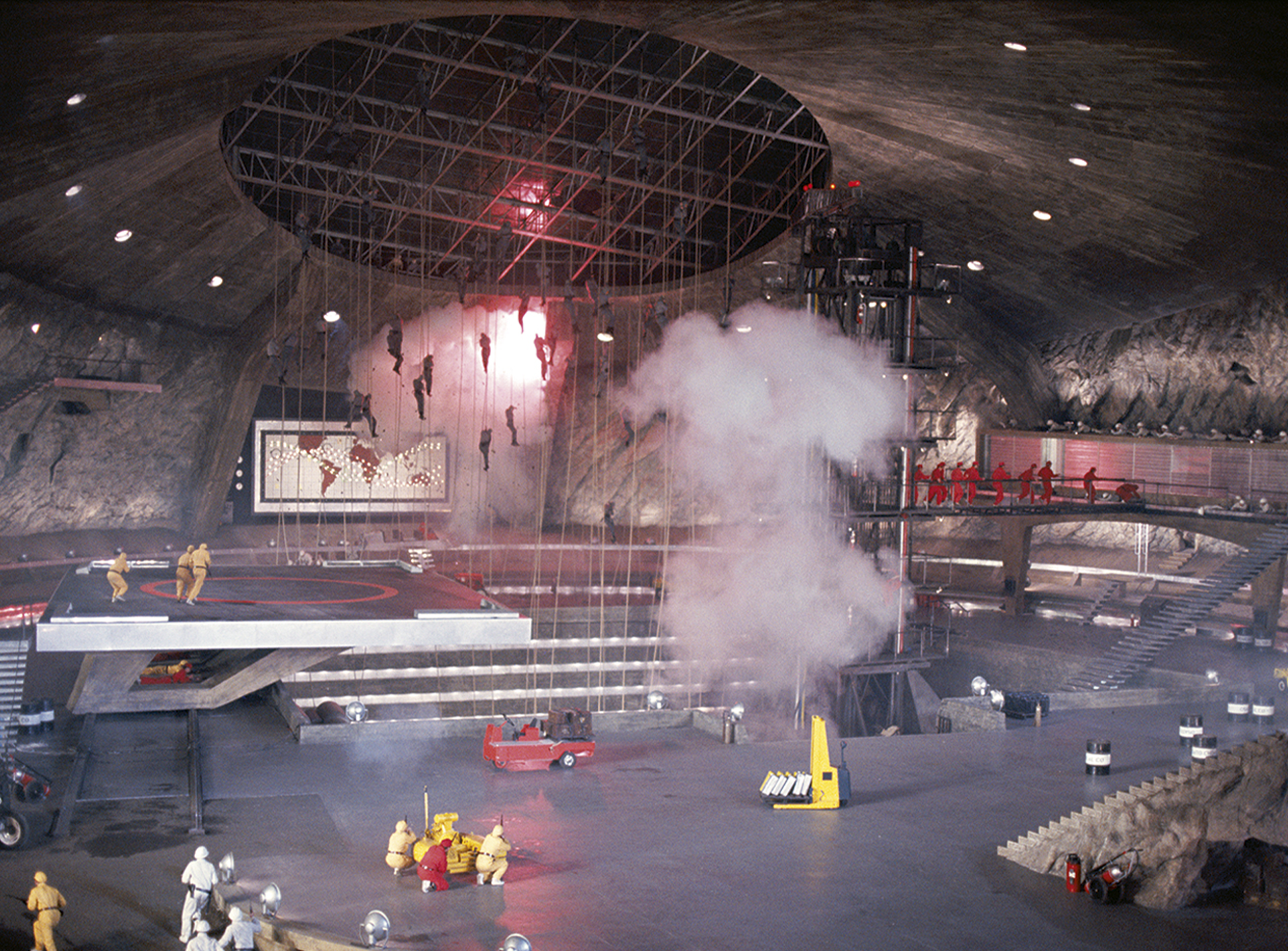 You Only Live Twice (1967) was the most epic 007 adventure to date, reflecting the increased global success of the franchise. With James Bond (Sean Connery) trying to foil Ernst Stavro Blofeld (Donald Pleasence)’s plot to orchestrate nuclear war between Russia and America, the climax sees Bond, Japanese secret service agents Tiger Tanaka (Tetsuro Tamba) and Kissy Suzuki (Mie Hama) plus a crack team of ninjas infiltrate Blofeld’s base hidden inside a dormant volcano. What follows is one of the most spectacular and influential action set-pieces in the series built around an iconic set by legendary Production Designer Ken Adam.

The filmmakers searched Japan for a coastal castle, inspired by the one in Fleming’s novel, to be the location for Blofeld’s lair. After considerable searching, a guide told the production team that there are no castles by the sea in Japan. Instead, they found a volcanic area on Kyushu, the Southern Island of Japan that contained the unusual dramatic feature of eight volcanoes all next to each other. A dinner that night among key crew decided that Blofeld’s base would be relocated inside an extinct volcano.

“The challenge appealed to me,” said Adam. “When I had done two or three sketches, Cubby said, ‘Looks interesting. How much is it going to cost?’ I knew it was going to be a gigantic set but I had no idea. I quoted about a million dollars. That was an enormous amount of money. Cubby didn’t blink an eye. ‘If you can do it for a million go ahead.’ And then my worries started…” When executives from United Artists came to visit they pointed out that this one set cost as much as DR. NO.

The statistics behind the set were impressive: 200ft across, 55 feet high on the side (rising on a slope to 125ft), 70ft in diameter. It comprised of 700 tons of steelwork and took 50 plasterers and 60 riggers working day and night. Ken Adam remembered they were working “under very dangerous conditions. It was wintry. They were working 120 feet in the air on the sloping lake, trying to fibreglass the whole structure. They had safety belts on but they were sliding all over the place. One night my wife and I climbed up with two bottles of brandy to keep them warm.”

The sheer size of the set provided other challenges beyond construction. Academy Award-winning cinematographer Freddie Young had to use practically every light at Pinewood studios to illuminate such a huge area for the wide shots. The space also created uncomfortable working conditions for the actors. “The volcano was absolutely freezing cold,” said Director Lewis Gilbert. “I thought ‘My God, we’re going to have a blue leading lady!’”

As the main unit shot in the control room, the stunt team would line up shots in the volcano. The script called for Tanaka’s ninjas to abseil from the top of the set, a 12-storey drop. 10 Japanese ninjas and 100 stuntmen made the descent. Future Bond second unit director Vic Armstrong became the first to make the drop.

“The roof was about four feet above the beams so you had to crawl along the beams bent over double with your backside sticking out over 125ft of nothing, get to your rope which you grasped very strongly, then wrap your hose pipe around it, and just launch yourself into space,” recalled Armstrong. “As you got near the bottom, you turned on the hose pipe like a brake shoe using both hands.”

The sequence also marked an important moment in 007 history. On December 2 1966, Sean Connery finished principal photography on You Only Live Twice shooting a fight with Blofeld’s henchman (Ronald Rich). It marked the end of his five-film run. Connery said goodbye to James Bond, if only briefly — as he returned for Diamonds Are Forever in 1971.