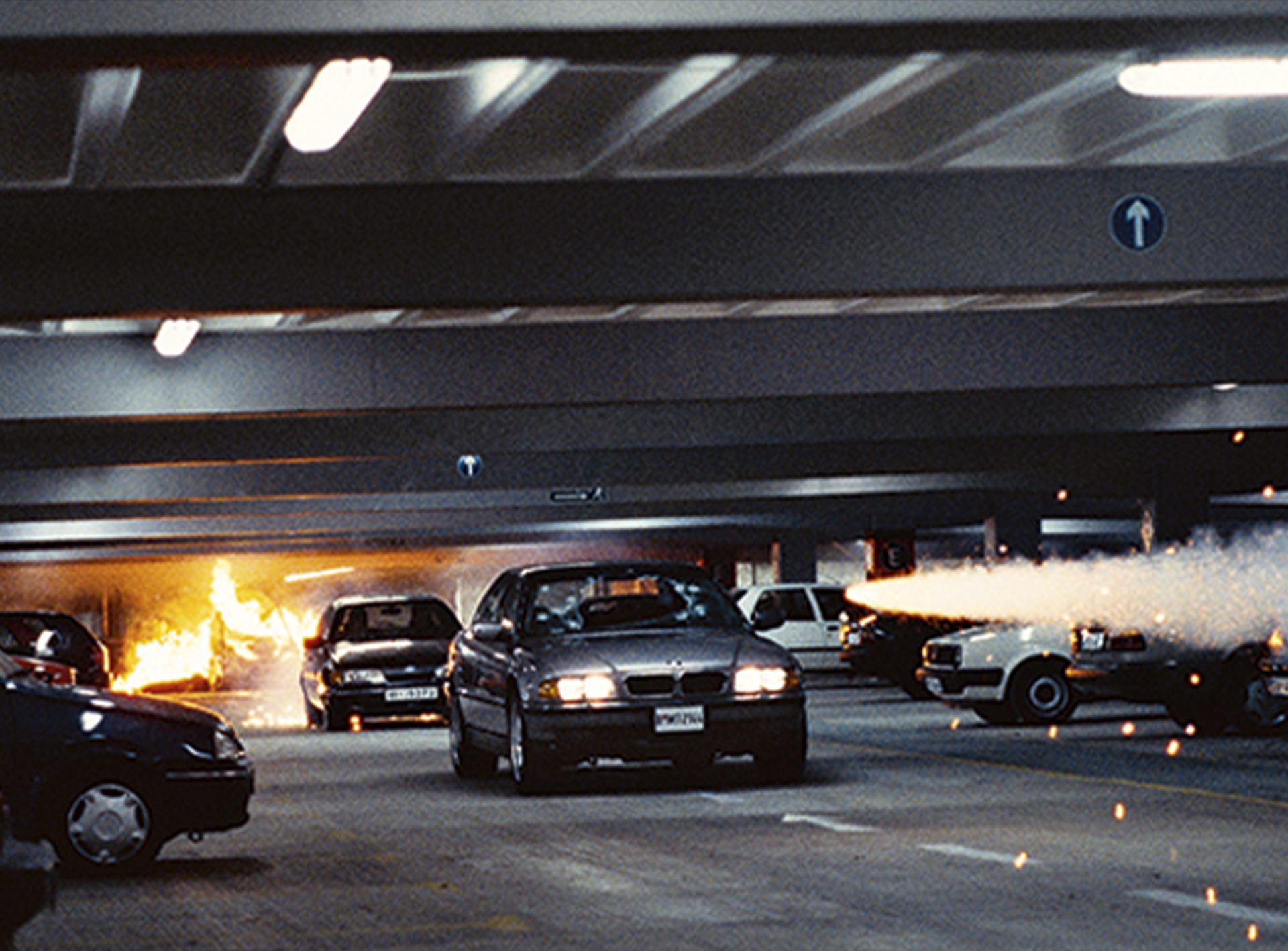 At the heart of Tomorrow Never Dies (1997) is one of the most inventive car chases in the 007 series. Bond (Pierce Brosnan) travels to Hamburg to investigate media mogul Elliot Carver (Jonathan Pryce) and track down an encoder that Carver plans to use to incite war between China and the UK.

Collecting a BMW 750iL from Q (Desmond Llewelyn) posing as a car rental agent, Bond uses the car initially as part of his cover as a banker.  The car quickly becomes a getaway vehicle from Carver’s men in a multi-storey car park. With the henchmen unable to break into the sedan with a sledge hammer due to its impregnable security system, Bond uses a touch pad on his specially modified cell phone to bring the BMW toward him. He dives into the backseat and navigates the car remotely, evading chasing vehicles, bullet fire, missiles and thick steel wires until he jumps out to manoeuvre the car onto the roof and over the top into a car rental office below.

On June 9, a production team of 65 people set about capturing the scene in a multi-storey car park at Brent Cross Shopping Centre in England doubling for Hamburg. The two-minute action sequence took three weeks to shoot, using both first and second units, the latter under the supervision of director Vic Armstrong.

“I wanted to make the car park chase different to what you normally see,” said Armstrong. “Rather than go bigger, it’s better to add some canny little twists to it. Here, the saving grace is the humour. At the same time, you must have it within the realm of believability. It’s a difficult line to walk.”

Some of these “canny little twists” come courtesy of Q dept: twelve rockets in the sunroof, caltrops (metal spikes) spilling from the back bumper, re-inflatable tyres (much to Bond’s amusement) and a cable-cutting device that emerges from the BMW’s hood badge.

Special effects supervisor Chris Corbould utilised 17 BMW 750iLs in aspen silver.  To create the effect of Bond driving his car via a touchpad on his cell phone, Corbould’s crew rebuilt four BMW 750iLs to be driven by hidden stunt driver Steve Griffin crouched on the back floorboard watching video monitors.

If the bulk of the sequence was shot in the UK, the scene’s final flourish — when Bond sends the car flying through the air to the street below — was shot on location at Lange Mühren, just across from Hamburg Hauptbahnhoff.