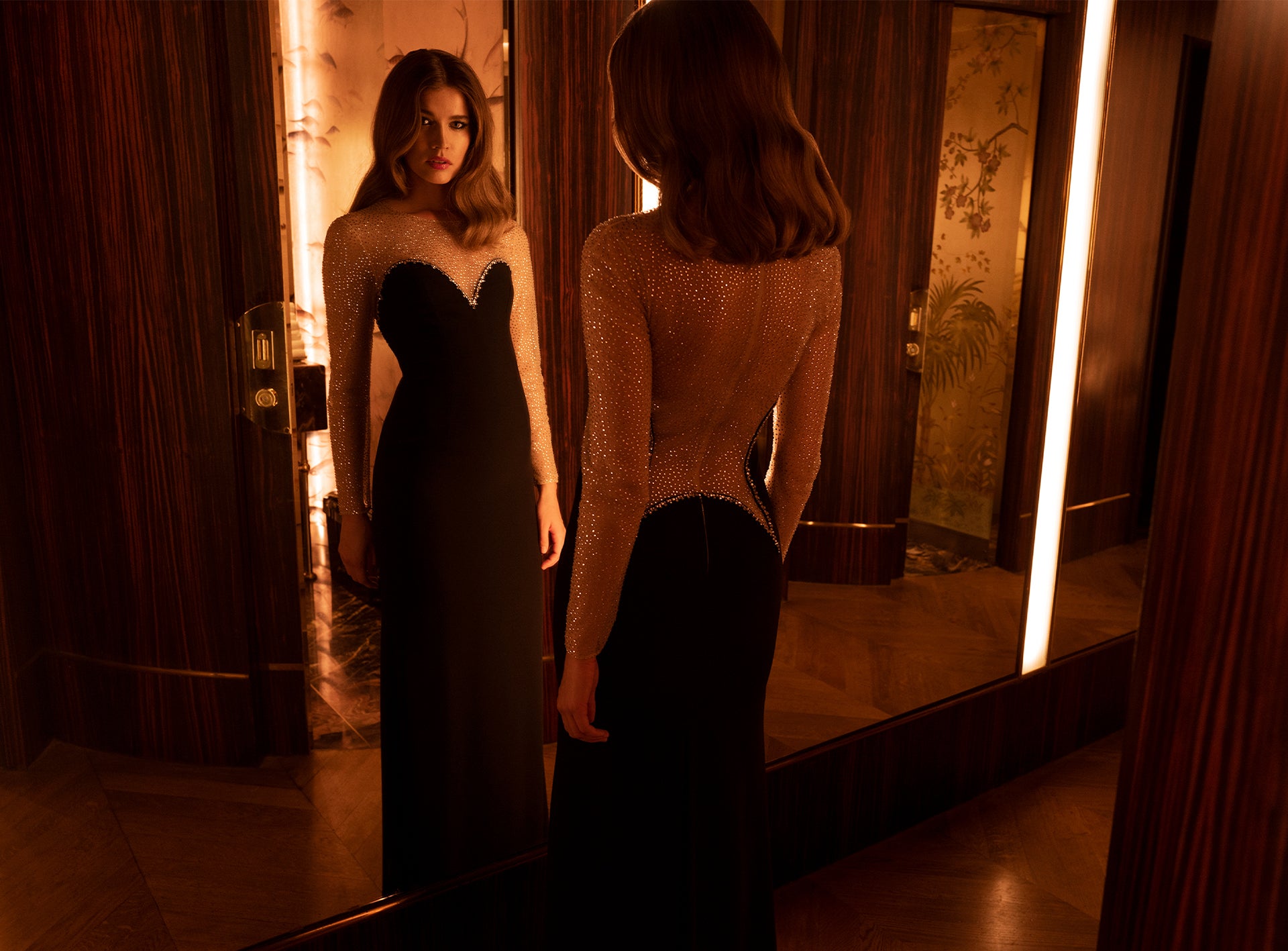 Jenny Packham knows exactly what she expects from a 007 movie. “Obviously when I think of Bond films, they have to be glamorous. Drop dead glamourous. I don’t think you should fight that at all.”

Packham was responsible for creating the modern classic satin dress worn by Solange (played by Caterina Murino) in 2006’s Casino Royale but she is quick to share the plaudits: “Costume Designer Lindy Hemming came to us and she really had a colour in mind for the dress for Solange. She wanted this beautiful pomegranate colour,” says Packham across the table in her London office as she chats to 007.com. We’re talking about the various designs Packham has created for the Bond films when we ask how the dresses are picked to appear in the films. “I know that they had this enormous fitting with Caterina for Casino Royale which lasted for hours and the gown they selected was the very first thing she tried on which just happened to be mine. Part of the allure is that unusual colour. It wasn’t bright, it was just slightly softer. The way that it pulled around Caterina however, to make her look sculpted, the high split and back detail with strapping is very sexy and part of the appeal as well. There’s something sexy about strapping. The dress was amazing but I think Caterina in the dress was what made it work.” After Casino Royale was released Packham says her team were inundated with orders from across the globe. “We had men ringing from around the world to order that dress for their wives and we still get orders now. It’s incredible to think that the movie came out 15 years ago and people still want that dress.”

Packham’s signature clothes are synonymous with glamorous occasions and A-list names like Adele, Angelina Jolie, Emily Blunt, Kate Winslet, Taylor Swift and The Duchess of Cambridge are among her clients. As one of the UK’s most successful and independent fashion brands, with flagship stores in London, Paris and New York, Packham has become one of the most sought after designers of choice when it comes to social dressing and high end fashion. “Well, glamorous dressing is what I do. It’s what James Bond does so well too so it is an amazing opportunity to work together.”

Packham’s first time working on a Bond film was in 2002 for Die Another Day: “The gown only stayed on Miranda Frost (played by Rosamund Pike) for a few seconds before it fell to the floor,” she laughs. “But I never get offended by what a costume designer or director does with one of my dresses because of the scale of what they are looking after. I think you have to understand at that point it is a costume and so it has to work in so many ways on set. The costume designers on James Bond are exceptionally good so you have to let them get on with their work as well.”

On No Time To Die, Jenny worked with costume designer Suttirat Anne Larlarb and provided a range of dresses for the Spectre party scene. “There were around 150 individual gowns in total. Almost all of the women in that particular scene are wearing Jenny Packham dresses, which is really nice. It’s great to continue to play a part in the films.”

Packham’s latest venture is an exclusive capsule collection of evening wear gowns created to celebrate the forthcoming 60th Anniversary of James Bond. The eight designs pay homage to the series’ legacy of powerful female characters with two styles inspired by Packham’s original designs which featured in ‘Die Another Day’ and ‘Casino Royale’

“The anniversary is 2022, so this collection is going to be an early start to celebrating the 60th anniversary of James Bond on the big screen by taking these dresses around the world.” We are lucky enough to get to see some of her early notes and sketches for these pieces. “We have chosen iconic dresses like the Sylvia Trench dress from Dr. No. It’s the first dress that stands out in the films, so that gave us inspiration and we started from there.”

Dresses in the new collection include Packham’s own designs from Die Another Day, a one shouldered tulle dress which is covered in transparent sequins and silver beads and the aforementioned Casino Royale creation, as well as dresses inspired by Octopussy, Tomorrow Never Dies and The World Is Not Enough. “EON gave us access to the classic evening wear from the 007 archives. When we got to look at the navy dress worn by Barbara Bach as Major Anya Amasova in The Spy Who Loved Me we found some rather interesting things about how it was created. That was intriguing. It was very slim fitting and here is a ribbon which runs inside and holds the whole gown in place. There’s a split but Barbara would have been able to move around as an actress without worrying about the split moving or revealing anything because of how the dress was constructed. It was a nice little secret to find for a designer. We all know what these items look like on the outside but it has been fascinating to get a closer look and discover more about the details inside.”

What about the other dresses? “We found out that Caterina Murino never got to own her dress from Casino Royale as the original is kept in the EON Archive. So we’ll be making sure she has one of those. It’s the dress that changed her life”.

The perfect symbiosis – Packham’s work and 007 – has endured for nearly two decades so what is it about the relationship that works so well? “When we make dresses it is a luxury garment and it is made to a very high level. That is something the Bond films need and that is also the production team’s expectations of anything in those films. We agree on high standards.”

Jenny Packham’s 007 dress collection is on sale now via https://jennypackham.com/