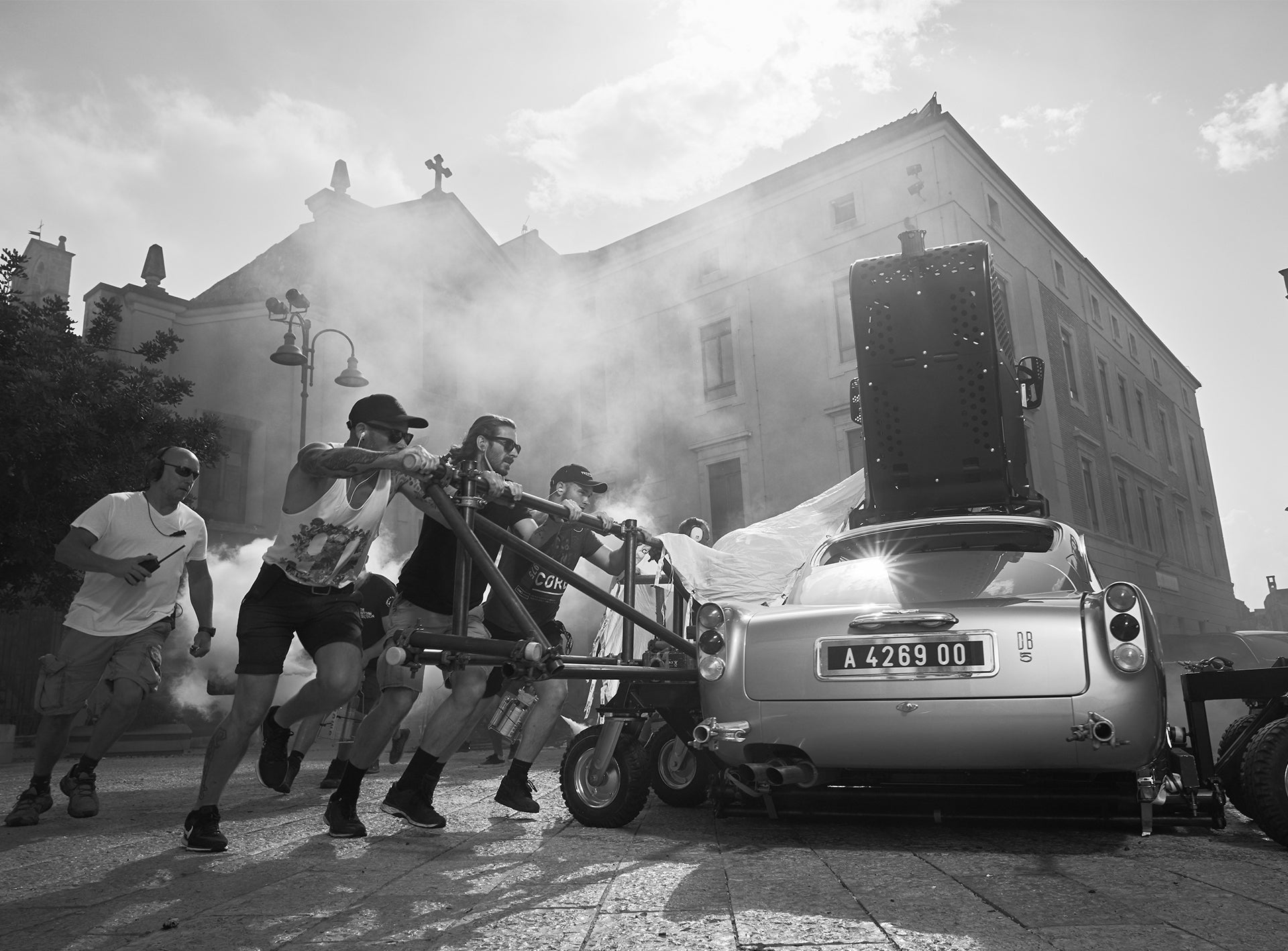 Over the last 18 years New Zealand-based photographer Nicola Dove has worked on some of the world’s most successful films, including No Time To Die. Here she tells us about her career and her time on Daniel Craig’s final 007 production.

How did you get started in photography?

When I left school, I took up photography because a flatmate in New Zealand had a camera, loved photography and I too immediately got a passion for it. I think there’s something about the instantaneous thing of making art, as opposed to painting, which is wonderful, but at a different pace. I ended up selling photography and fell in love with documentary photography. I love that ticket into the different worlds. I ended up working for magazines, doing editorial and portraiture. I also worked for charities and aid agencies and I traveled a lot shooting for them. Then I moved from New Zealand to London and met a producer who introduced me to the idea of film stills. That producer saw the documentary storytelling capability that I had developed and said ‘why don’t you think about going on set?’ I ended up doing short films for free for a year or two and then worked with him on a film production.

So what was your first feature film?

My first feature film was a film by director Sally Potter. She’s a very avant garde filmmaker who attracts an amazing cast. It was a case of someone on that crew putting me forward for the next job. My second film was Enduring Love with Daniel Craig, who was pre-Bond then. The film industry is about networking and making those contacts because a lot of it is based on trust and working in a lot of high pressure situations.

How did you end up on a Bond film?

I was put forward by a contact and interviewed and it went from there. I start my work with the script. I like to get really involved in the story so that I really understand it and its characters and what their journey is. As a photographer I’m trying to find and create images that really tell a story in one single image. On a James Bond film, you have a headstart on knowing some of that background on the characters, but this was a completely new story. The filmmakers know what they’re doing and it’s about trying to align with it. I know the filmmakers had a particular set of hopes, in terms of showing Bond as an emotional character who is more than just an action figure. That was something I wanted to capture on set.

Is a Bond film set different from other movie sets?

Absolutely. On the surface, everything looks the same, there’s cameras and sound guys and girls and lots of equipment and lighting gear and it’s all the same, but it is different. There’s another vibe going on, which is very exciting. Everyone brings their A game. It stays like that the whole way through, every day. When we started on No Time To Die I started filming in Jamaica. The first day was filming on a busy street scene with Bond going round a roundabout. It was fast and chaotic and it was really like jumping straight in. It was great fun. We spend a lot of time at Pinewood Studios and that’s different again because every time you walk in, you park your car and you walk down that alleyway and all you see is that massive 007 stage and sign. Every morning when you arrive there, it’s just like ‘Oh my God, I’m on a 007 film!’ That really makes a difference.

What was it like being on location and capturing Bond?

I love traveling and being in different locations around the world. One day we’re in Scotland and then in southern Italy. I travel with my family and my husband homeschooled the kids on the road. They came up to Scotland and they were in a motorhome instead of a hotel because we were filming out in the Highlands. At the end of each day I would just call my husband and say give me your coordinates of where they had gone exploring that day. I’d go and rendezvous in some paddock on the edge of an amazing loch. They came to Matera and stayed there for a month – Matera is an extraordinary place with all the caves, the steps and its whole history. Walking down to set every morning with the sun coming up over the cobblestoned streets and ancient buildings was fantastic. That was pretty special and it became a family adventure. The whole Bond family ethos comes from the producers Michael G. Wilson and Barbara Broccoli as they create this wonderful atmosphere. I know people say that, and it sounds like a cliché, but it really is true. They’re loyal to people and they care about people and their families. It’s really special.

How did you go about working with the cast and crew?

In terms of building a relationship with actors, you just have to be really good at your job. There’s this sort of high level energy going on and you’re part of it. You’ve got to get some images. You’re going to help sell a film with them but you also don’t want to be in people’s faces all day long. They’ve got another job to do as actors and it’s very much about being in harmony with everything that’s going on around you on set. Once you can get into that flow with the cast and the crew, then everyone can relax.

How do you balance the candid shots showing behind the scenes moments with knowing the images to capture to showcase 007 in the moment?

You’re thinking all the time about the different layers that you’re trying to achieve. All those behind the scenes images become historical documents in the long run. Certainly when you look back on some of the early Bond films, those photographs capture a moment in film history. Then you’ve got to also tell the story of the film itself. Is this good for telling the story of No Time To Die? The likes of Daniel Craig and the main cast, they’re all such pros and Daniel, obviously, is vastly experienced so it becomes a bit of an unspoken collaboration going on there too. He knows what works. The shot of him that we released in his suit walking down the London street, the Aston Martin car behind, everyone knew this looked cool and it was a bit of an unspoken collaboration there. Daniel did a few extra steps for me during a retake. The camera had already gone off but I needed a few extra steps and I was walking backwards, staying out of the way of everything and he just did it every time. He might not even remember that as it’s sort of an instinct.

How do you find the right spot to be in to capture these big moments on set?

There’s many things you mustn’t do and then what’s left is where you discover what your options are. Mostly, it’s really about finding that place to capture images and finding a way through.The second unit did a lot of the big stunts. They have another photographer, Jason Boland, who’s renowned for his stunt work and action films. Greg Williams also comes in and takes pictures as well.

You mentioned working with other photographers. What did you capture?

I shot all the gallery posters for all the crew except for Daniel, who prefers to do his shoot when filming has finished. All the other cast members, I think that there were 16,  we shot over a number of days. I bring in a team of assistants, then we bring in lights and there are concepts that get drawn up and we aim to deliver some of those concepts. We had two different lighting set-ups for the Bond poster shoots. Whenever the cast is scheduled to have a break in the day they get brought over to the mini photo studio and we put on some music and get them into their character. Sometimes you have 10 minutes, sometimes you get an hour. We work it into an actual filming day. It’s all part of the production day and all those involved in the marketing get involved. There’s a whole team ready to make it happen on the logistics side of it.

How does it feel seeing those images go into the world to promote the film?

It’s always really rewarding when you see the initial posters come out. It’s really fun to see it come together and see it in the real world. I’ve got no chance of seeing Bond posters where I live in New Zealand on the side of buses, but people send them to me. The thing about being a stills photographer is generally no one even knows who you are but we are probably some of the most widely published photographers on the planet with the reach of our images. It’s such a strange thing. I’m happy to go under the radar. That’s kind of my job to be under the radar. I think the first time I was a bit wowed by my work on Bond was when they were just starting to warm up for the launch of the film, which obviously got pushed back but they had some images up on billboards at Times Square which were really cool to see. Some of the marketing team were there and they sent pictures to me and it was really amazing.

You mentioned the need to go under the radar, do you not have to carry a lot of equipment?

Day to day I carry two camera bodies and a couple of lenses. Getting to know the gear you have really well and not falling into that trap of thinking, ‘I’m only a good photographer if I’ve got hundreds of lenses and this, that and the other’. You make images with your understanding of the story and being in the right place at the right time with an understanding of light. I do have a backup system in the car, which I never pull out but that’s my old cameras. We now use silent mirrorless cameras. But back in the day we obviously used the DSLRs and I still have that as backup. Just in case.

Which of your No Time To Die images do you think is most definitive?

Well, I guess there’s the London shot mentioned, but there is another image that we got in Jamaica, on day two or day three, and it was the first time we were filming 007’s return to his house. It was a beautiful set on the side of the sea with a secluded beach. Bond gets his gun out and he walks through the house and he walks into some sunlight and it was suddenly very Bond-esque. A lot of shadows and he’s got his white shirt on but the gun is black. There is a light and shadow thing going on. Having a digital camera meant I could see that straight away. Daniel walked through that light quickly, less than a second. That’s a split second moment where that light is like that, and Daniel is in place, as Bond. You’ve just got to hope that in that split second, Daniel’s not blinking or looking the other way. He wasn’t thankfully and that was the first time I saw something where I thought ‘I’ve got a Bond shot. This is James Bond’.