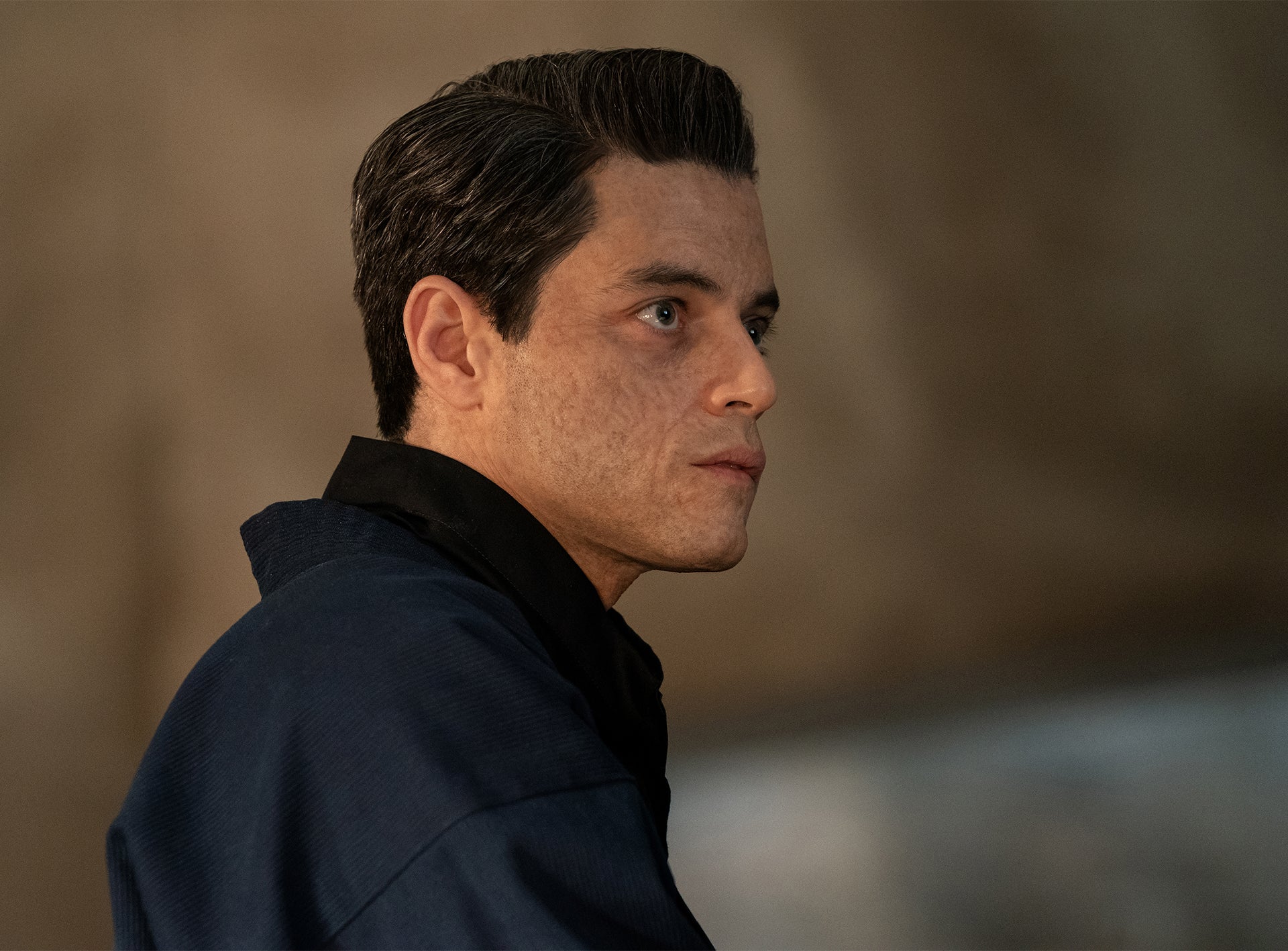 From stunt doubles’ wigs to Safin’s prosthetics, Daniel Phillips is the man responsible for defining the look of each character in No Time To Die. It was the first Bond film for the Oscar and BAFTA nominated hair & make-up artist, and he shares his story with us here.

How did your career get started in the film business?

I knew I always wanted to work in film. I started off as a hairstylist through a family connection.  Then I trained as a graphic artist and I started designing interiors for luxury yachts. I loved Hammer House of Horror films as a child and I remember writing to the studio enquring, ‘How does one become a make-up person in film’? Eventually, I applied for a place at the London College of Fashion for a course on media, film, hair and make-up.  My first job was at the BBC. They were looking to take men into the industry because then (the late ‘80s) it tended to be women in the make-up department in television.  Men tended to do make-up in films. I was one of three guys in a department of 250 females at the BBC in London. I worked on lots of period dramas. I had the most wonderful time at the BBC and I stayed there for about eight years and then went freelance. I started working on very small, independent movies and worked my way up over the years. Even now, I love doing independent movies, because that’s where I came from. When you get onto a big scale movie, you tend to just become a number – but I would say that’s what’s different with a Bond film, because it’s a real family affair. Everybody was treated so well. It’s probably the only big budget film that I’ve worked on where the Producers, Director, everybody just behaved in such a wonderful manner that you kind of fit.

How did you come about working on No Time To Die?

I’ve always watched the Bonds since I was a little kid and never imagined I would ever work on one. I worked with Cary eight years ago on Jane Eyre which was Cary’s first English period film. But I still had to go through the whole interview stage and went to meet Michael, Barbara and Cary. I had a jolly nice catch up with Cary at Pinewood and I left saying, ‘Well, lovely to see you. If it comes my way, I’ll be thrilled obviously.’ And I remember the day I got the call I was shooting a movie and it was the best feeling in the world. It doesn’t get any better than a Bond movie.

How did you prepare for shooting?

My prep time was quite long – in total, it must have been about three months. But I used that time organising stunt doubles, organising wigs, organising fittings. I would create mood boards and looks for various actors. Often you wouldn’t see your actors till a couple of weeks before, sometimes the week before, if you’re very lucky. So I would be going to production meetings, coming up with concept drawings, concept sketches. You’d meet all the other departments, meet the production designers, costume designers, because everything’s got to gel together. Also by then, we knew we had this character, Safin – Rami’s character; so that took a lot of time to prep and decide which way we were going with that. I also started getting my team together. I hooked up with Barry Gower, Barry is a prosthetics guy and we worked together on Rami’s look which took quite a long time to pin down because we were consulting with Rami who was off on another job in America. You’ve got to please the Director and the Producers and then you’ve got to come up with various concept sketches so it’s quite a long process. Of all the characters in No Time To Die, Rami’s character is the one that we had to really nail down and get right.

Where did Safin’s look come from?

We knew that he needed to have a toxic poisoning skin condition so we researched lots of conditions and did a lot of mood boards and showed Cary. We did a mould of Rami’s face and then spent weeks sculpting it and getting the skin textures right. Rami was filming Mr. Robot at the time and he had his hair shaved quite short so we had to wig him and we had to age him slightly. So I did that with the hair and all the skin marks and he had some wrinkles and some eye bags as well. And the wig has got the grey flecks through as well, which you can never achieve fully unless you put on a wig, because it just doesn’t work. Funnily enough, when we were doing the make-up, it didn’t really come alive until the whole look with the wig was put on and it all came together. That’s when you see the full character, which goes to show that wigs are just as important as make-up in terms of creating that character. And I always tell my team, the more important thing for me, is the hair and the wigs because that can make and break a look. Even if you’ve got great make-up, if you’ve got a bad wig on, that’s all you’re going to notice.

How long did it take to put on Rami’s prosthetics?
I’ve worked on prosthetics where they can take three or four hours, but this was pretty quick. I would prep the skin and hair and then Barry (and Patt Foad his assistant) would put the prosthetics on. And that would take about an hour and fifteen minutes to put the whole face on. Then Rami would come over to me, I would put the wig on and start blending the back of the wig into his own hair at the nape and fixing the hairline. And then as I’m doing that, they will be colouring up all the pieces. We kind of got it down to about an hour and a half in the end. That’s quite quick, really for full face make-up, neck and hands as well. But we had to be quick just because we were told we had to be quick. The filming days are long so you can’t have an actor coming in at silly o’clock in the morning, spending hours and hours in prosthetics, then a whole day’s shooting. And you have to remember they’ve got to take the prosthetics off at the end of the day as well.

How do you go about deciding someone like Nomi’s (Lashana Lynch) look?
So I probably did about four or five make-up tests on her, took pictures, sent them off to Cary. He called me back and said, ‘Now with Lashana, I’m thinking Nubian princess’. So once we decided we were going to go that way then we made a wig and knotted it into her hair. But then my job is to work out the practicalities of that. You’ve got this woman at the beginning, this agent who’s in this long braided, quite elaborate wig, but then later she’s coming down cables and flying through buildings and doing somersaults, you think ‘Well, that’s not gonna work’. I remember going up to Barbara saying ‘Barbara, we’ve got this wig on Lashana. And as great as it is, I just can’t see how this would sort of work in the story realistically, without it looking comical. You know, scaling down a building’. Barbara said, ‘Tell Cary that this is how you see it and what you think is right’. And Cary’s great, you know, he went with it. The short hair works well, I think it’s right for her. It’s quite androgynous as well which I quite like, it’s quite a powerful look. That’s her own hair. We coiled it each day into little twists, little bumps and twists. Just to give it a shape and a style, basically.

Were you involved in designing Primo’s eye?
Barry and I designed that. We did the concepts and sent them onto the studio to look at. And then a different company made the bionic eye. It’s a Scleral Lens so it goes over the whole eye. There’s also an eyeball that was made for the fight sequence where the eyeball falls down the steps. But from my part, it’s a Scleral Lens which covers up the whole eye. And it’s based on the camera of an iPhone.

What’s your lasting memory of No Time To Die?
What made it the dream job is that you’ve got a production that are like a family that really looks after us. I’m travelling to the most incredible places and watching the incredible stunts of Range Rovers rolling somersaults. I remember standing in Scotland watching the car chase with helicopters flying overheard. And I’m standing there looking at all these cars flying about and I’m thinking to myself ‘This is what filmmaking is about. This is why I got into this’. And there are very few moments like that on a film set.