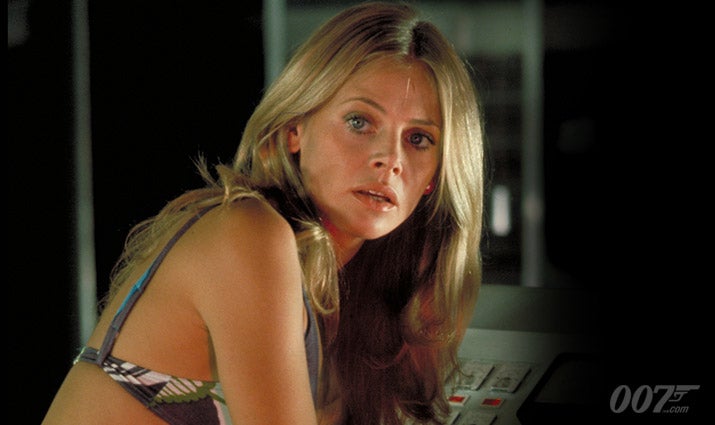 Swedish actress Britt Ekland plays Mary Goodnight in The Man With The Golden Gun. Here, she answers your questions…

Q Mark Roberts: What are your fondest memories of The Man With The Golden Gun?
A There are so many but just being in Cubby Broccoli’s office and being told the part of Mary Goodnight was mine is forever etched in my memory. Flying with my children to Bangkok, filming in such an exotic place was very special. Meeting and becoming friends with Maud Adams and always having a great time together and working with Roger, who was the most non star-like actor I’d ever worked with. None of that staying in the trailer and only coming on set for the scene, he was always warm and jokey with everyone and had a very different sense of humor.

Q Michael Kramer: How much fun was it working with Roger Moore? And what was the best part about filming with him?
A The best part of working with Roger was that he made you feel good about yourself and confident and that is a quality not a lot of actors have. It’s very scary to come on set and work with a famous star and even though I had co-starred in several American and English movies, I still felt very insecure! Roger did like to joke around and used to tease me and Maud, calling us Mud and Bert! Roger is a very charming man and it was ultimately one of the best movies I ever worked on, a very enjoyable time in my life.

Q Bruce Pahde: What scene was the most physically demanding for you?
A Any scene where you wear a bikini is demanding but I think the scenes where Roger and I run from the explosions were difficult because of timing and of course if you watch the film you’ll see me, trying to throw myself on the ground as my bottom was too close to the explosive and Roger yanking me up and just kept going. Also running in high heel shoes, well wedges, is not easy.

Q Jeremy Pampuch: What was your favourite location to shoot for the film and why?
A I liked Bangkok but it was very hot and humid and very bad air quality, still is, I went back a couple of years ago and nothing had changed! Phuket was incredible, no hotels or tourists just miles and miles of empty white beaches. I enjoyed Hong Kong very much and used to spend my free time wandering around looking in antique shops.