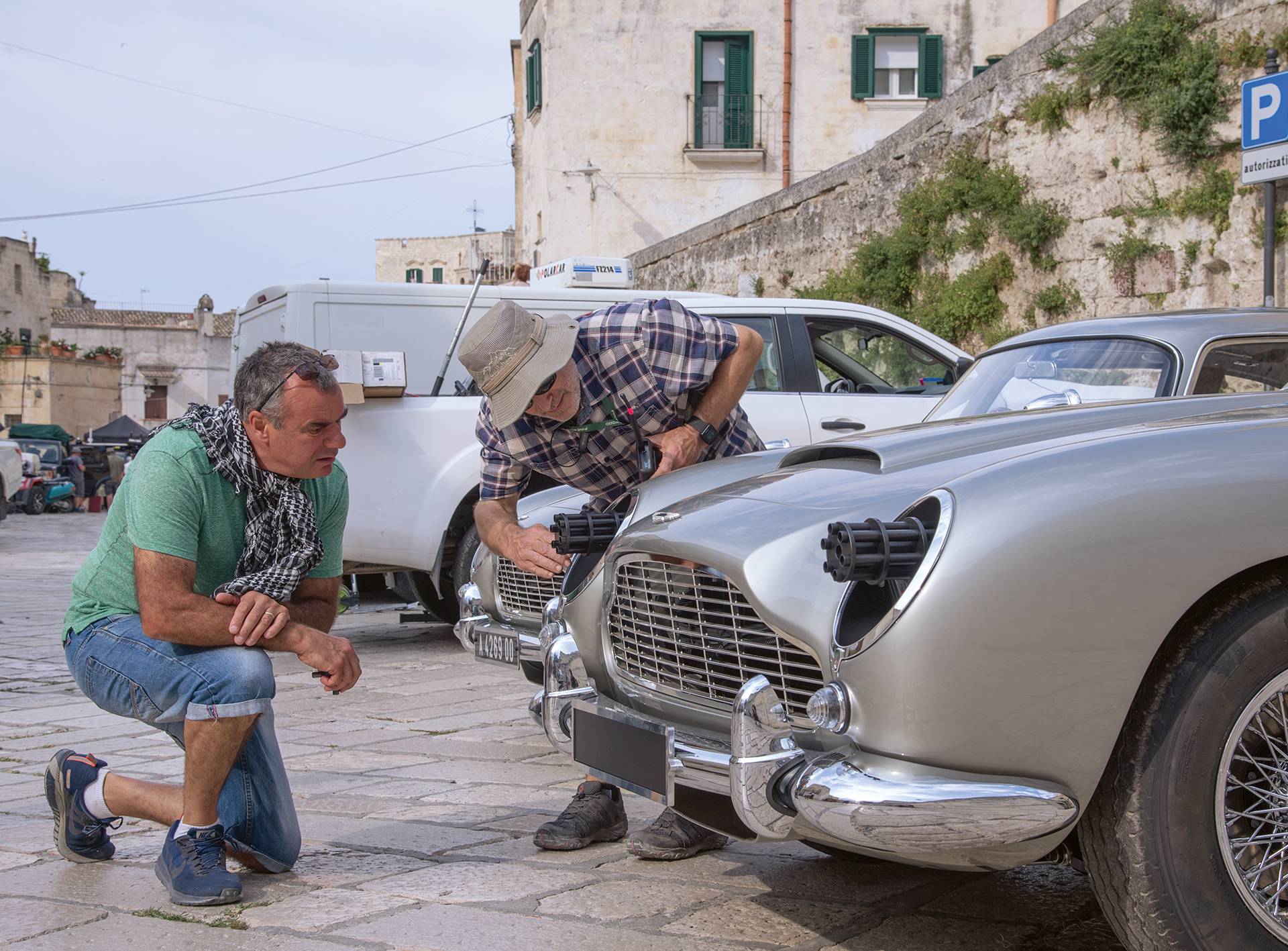 When 007 first picked up the keys to the DB5 in Goldfinger, a new partnership was born. Here we take a look at how Daniel Craig’s final movie is a love letter to the iconic car, with writer Will Lawrence.

“The DB5 is a massive character,” Craig says, speaking to Lawrence a few months after production has wrapped. “Aston Martins are characters in the movie as a whole, but the DB5 is the one that people are emotionally connected to because of its history and because of the gadgets.” He smiles. “We use them all.”

For the Matera piazza scenes, Daniel Craig spent time with the film’s Stunt Co-ordinator, Lee Morrison and Lead Stunt Driver Mark Higgins, learning how to spin the car through a 360-degree circle. Both Craig and director Cary Joji Fukunaga were delighted with the scene. “Audiences know when something is done for real,” says Fukanaga during filming. “Doing stunts for real with the actors is always going to feel that much more exciting. With Daniel doing the car work and having the confidence of Lee Morrison there to guide him through it, it’s also going to look spectacular.”

The DB5 showcases a host of gadgets during the film’s car chase through the labyrinthine streets of Matera. When designing the gadgetry for the sequence, Corbould first met with Fukunaga and producers Michael G. Wilson and Barbara Broccoli to work out what they wanted to include in the film. “Cary wanted the sequence to be gritty, but he didn’t want it to be over the top,” Corbould explains. “The sequence has been evolving right up to us shooting the scenes on location in Matera. There are so many things that make it exciting. First, you’ve got the beautiful location, a city with such a rich history that looks amazing. Then throw the car into the equation, which is doing more than it’s done since Goldfinger. We had a fleeting glimpse of it in Skyfall and a few other films, but Goldfinger was its last big sequence. And now it’s back in all its glory, with a spectacular sequence again – the audience will love it.”

To shoot the Matera sequence, the film-makers used two classic DB5s with an identical finish, designated the hero cars, one of which belongs to EON Productions and the other to a private owner. All the stunt work was filmed using eight bespoke DB5 replicas built specifically for the production by Aston Martin’s Q Advanced Operations department, headed up by Senior Programme Manager, Ben Strong.

Two of the replicas were designed as gadget cars, housing the smoke screen, mine dispenser and machine guns. Two were also fitted with “pods” that allowed the stunt drivers to control the cars while sitting on the roof. This ensured that the actors could be filmed inside the car while driving at high speed.

To carry the mine dispenser, the two gadget cars had a small shelf fitted just behind their rear bumpers which, when tilted, spilled the explosive cargo all over the road. Around 20 mines were deployed, with the special effects team using pyrotechnics to replicate the explosions. To capture the moment when the SPECTRE agents unleash their hail of bullets, the team used hard pellets that shatter on impact. These damage the windscreen, sending a crazing pattern splintering across it, with a safety screen to protect the actors from harm.

The gadget cars’ miniguns operate via the same methodology as those used in Skyfall. Each gun follows a reciprocating motion as a flickering gas flame sits at the front to make it look as though it is firing, while a pneumatic ram moves the headlamps and allows the guns to protrude. The guns and mechanisms are mounted in the wings, hardwired into the controls inside the car, and operated by the driver. During the doughnut sequence, however, the guns are engaged via remote control.

As the guns are fired, a cascade of shells ejects through the apertures behind the DB5’s side strakes. This was achieved by a pressurised circular tube filled with empty shells and mounted on the car. The special effects team remotely released a solenoid, which allowed the air to escape and, in turn, ejected the shells at high velocity. A smokescreen effect was achieved by injecting smoke oil straight into the exhaust manifold, which allowed smoke to be released – the car fills the entire square with smoke in just one revolution.

As well as the bolstered metal structure and modular carbon fibre bodywork, each of the eight bespoke DB5 replicas also features an integrated roll-cage, side door bars and brace bars along the top of the turrets, as well as a race-calibre fuel cell and hydraulic handbrake. With the exception of the automatic transmissions in the two pod cars, Aston Martin used a modern powertrain solution for each vehicle. The engineers then modified certain elements to create a unique driveline. Each car features bespoke suspension with World Rallycross-spec dampers to allow it to be driven down steep steps. The cars also have classic 15in Crossbow wheels, although these are fitted with modern Avon tyres designed to cope with the different surfaces that the DB5 encounters – polished granite, cobbles, tarmac and asphalt. There is also a racing pedal box and specially tuned brakes to help the car run from a slippery surface to one that grips well, and also to help it transition from wet surfaces to dry.

This is an extract from Will Lawrence’s article for Aston Martin magazine.