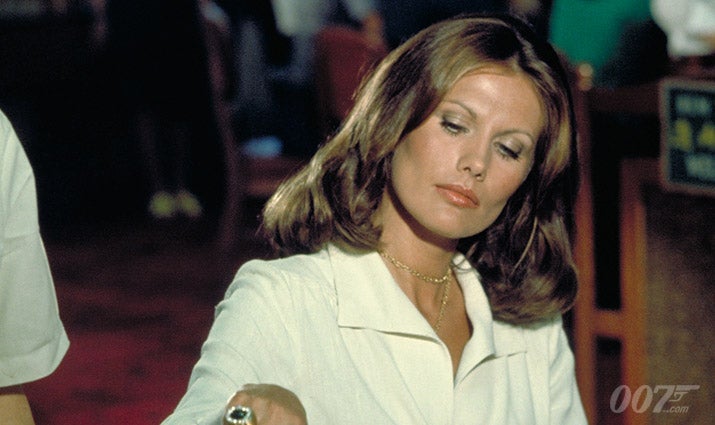 Q Bret Swanie: Which other “Bond girl” would you have wanted to play.
A I never thought about that but, I think the franchise has done a great job in making sure the “Bond girls” are strong characters and contemporary. I have really enjoyed Judi Dench and will miss her participation. Not a “Bond girl” role but that would have been fun to play.

Q Steven Bayman: Knowing the impact that it had had on your life by becoming a Bond Girl, did you hesitate in accepting the role of Octopussy, because of all the media furore that comes with each film?
A I never hesitated. It was such a treat to be able to once again work with Roger Moore, the producer Cubby Broccoli and the crew I had come to like so much. Being offered the title role of Octopussy also was a real honour.

Q Vitaly Man: Which Bond film was most fun?
A I enjoyed them both, to a large degree because I was lucky to have Roger Moore as “my” Bond. Britt Ekland also became a good friend during GOLDEN GUN and we spent a lot of our free time together doing “girlie” things like shopping and gossiping.

Q Paul Rankin: What was it like working with Roger Moore?
A He was always very supportive, a real team player and kept everybody in good spirits during the filming.

Q Chris Lethbridge: How did your expectations compare with your experience?
A I was just trying to focus on doing my job and hoped for the best as I really didn’t understand just how big Bond was in the beginning. It was a bit daunting at first, when I realised what I had gotten involved with and also to get so much personal attention. Although I had made three feature length movies prior and you always hope for success, I had never worked on a movie where there was so much expectation, before we’d even shot one frame. Also, I never expected “Bond” to become such a long running franchise and that my participation would have such a lasting effect on my professional life. Kudos to Michael G Wilson and Barbara Broccoli, who deserve a lot of credit for keeping Bond relevant, meeting and often exceeding, the continued high expectations every time a new film is released.

Q Daniel Sam Ohiomah: How was it acting alongside Christopher Lee?
A He was a real gentleman during the filming and extremely professional coupled with a very dry sense of humour.  I really didn’t know that much about him other than his Dracula interpretation at first but, I’m so grateful to have met and had the pleasure to have worked with this talented and wonderful man.

Q Phil Quinones: If you had the chance to do the roles again, would there be anything you would do differently?
A Gosh, I know I would have played both roles differently now that I have much more experience and confidence as an actor.