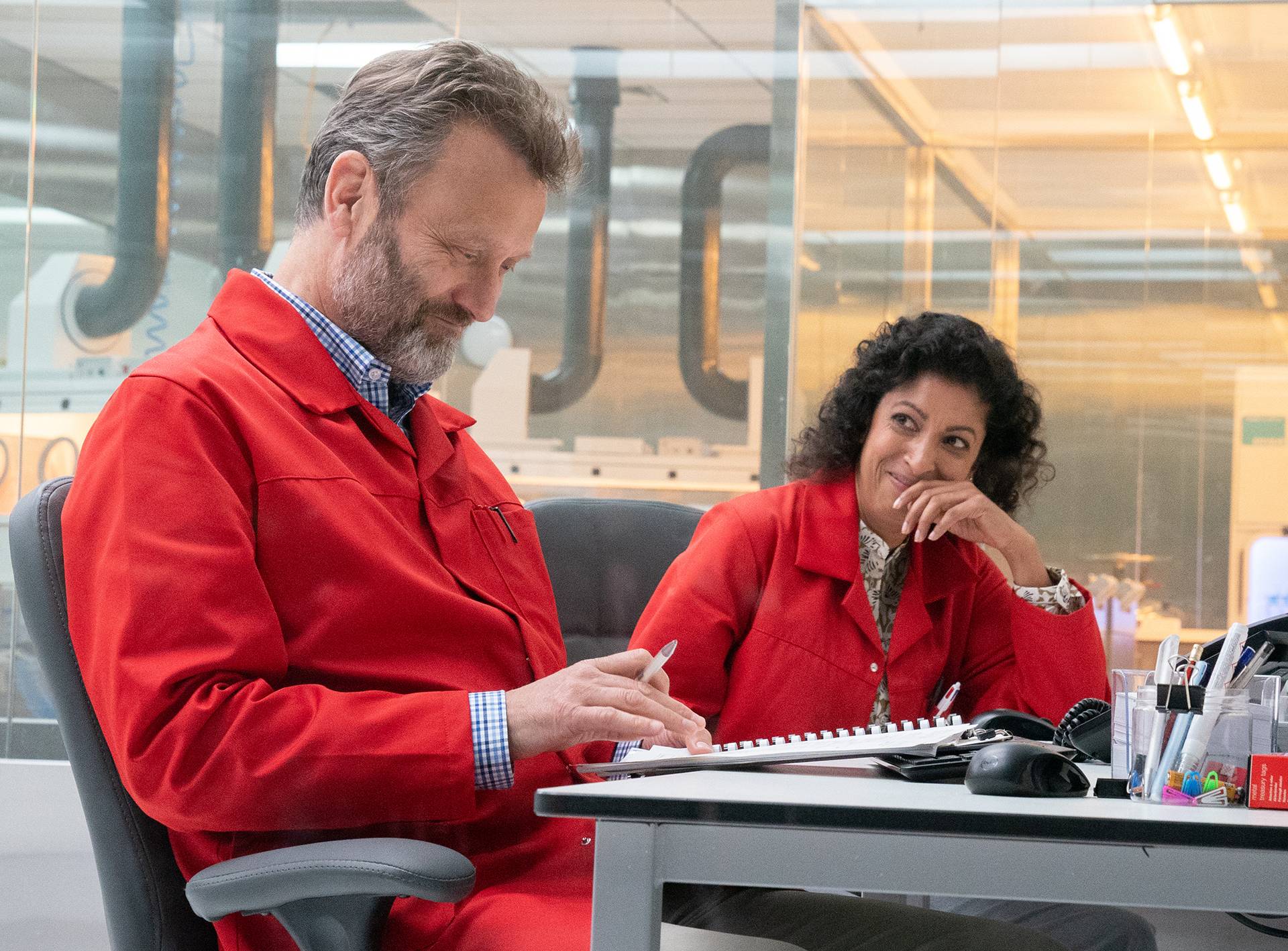 Debbie McWilliams is a leading casting director and has worked on every James Bond film since 1981’s For Your Eyes Only. Not only has she cast some of the biggest villains and leading actresses, she was an instrumental part of the casting process of bringing Timothy Dalton, Pierce Brosnan and Daniel Craig to 007’s shoes. Debbie shares some of her insights from No Time To Die, on which she worked alongside her great-niece Jemima McWilliams.

How did you get started with the 007 film franchise?

I was very young and inexperienced when I started but nobody seemed to question that.  For Your Eyes Only was my first 007 film which was when Pierce Brosnan became known to everybody. I had cast Cassandra Harris in a role and it was shooting out in Corfu. Pierce was her then boyfriend, and he went out to stay with her. Various people, including Cubby Broccoli, said, ‘Oh, who’s he?’ and so he became a known quantity way back then.

So what keeps you busiest when casting for a James Bond film?

One of the more hair-raising times was on Casino Royale. We started that without our leading lady and that’s never happened before. Eva Green won the day in the end but it was a bit tricky, the whole thing. We were absolutely down to the week before filming with Mads Mikkelsen as well. I had watched several of Mads Mikkelsen’s films and we were all out in Prague, in pre-production on Casino Royale, and I suddenly found out that he was right there filming something. So I grabbed hold of him, quite literally. I introduced him to Barbara Broccoli and she just said: ‘Right, get him to costume, get him to hair and makeup and then we’ll take him on the set.’ That’s exactly what we did. So he arrived as Le Chiffre and Martin Campbell went, ‘Oh, hi. You must be Le Chiffre’ and that was that.

Wow. It must be a thrill to help elevate people and put them in the limelight?

Without a shadow of a doubt, it’s been my greatest pleasure, really. Not from any sort of egotistical point of view but it’s just lovely if you see great talent in somebody and you bring them to the attention of the wider public then because I think they deserve it. That’s been a real treat for me. I’m allowed to go pretty much anywhere to find the right people. Paris has been a great source, particularly for our leading ladies and so I’ve cast there many times. Germany, Denmark and Sweden and much further afield like Mexico and Chile – the producers have always been fantastic about giving me free rein to go wherever I felt I needed to go.

Obviously you’ve auditioned lots of people. So what makes a great audition for the 007 film franchise?

That’s the impossible question to answer. They’ve either got it or they haven’t. It’s just as simple as that. Having the confidence of knowing who you are. Like David Denzik, for instance. The part of Valdo Obruchev was written initially as a Cuban male. David came in and Cary really, really liked him too. David went off and learnt a Cuban accent and when he came back some while later, to meet everybody at Pinewood, the role had changed nationalities but David said “I’ve learned this Cuban accent, at least let me do it.” He did this whole scene in a Cuban accent, and we didn’t need him to at all, but he just went, “Well, I’m going to do it. And that’s that!” So needless to say, he got the part. He just was so natural with everybody.

When did you come on board for No Time To Die?

When Cary came on board there was almost no overlap in plot or cast or anything to what had gone before so it was a completely new thing. You have to get a good nucleus of a team together and a good blend of personalities. You have to know that you’re going to get on with somebody and there can’t be anybody who’s too ridiculously ‘starry’ or otherwise it’s just not going to work. It is very much a team effort and everyone has to pull their weight. Then there’s a mixture of looking at the script and looking at availability. For the Nomi role, for instance, we met many actresses. It boiled down to three people in the end, although Lashana Lynch was not amongst those three because she was never available to be met. She was doing a play somewhere and we kept circling back round to her. Eventually, I managed to grab her. Because it’s such a physical part, she had to go through a stunt assessment so that had to take place and then the hard work began, they really put her through it. I thought she did marvelously. The other major challenges in casting are a bit obvious, really. It’s the baddie and the leading lady. There were three leading ladies in this one but we obviously already had Léa Seydoux. Ana de Armas was very much a Cary and Daniel Craig choice because Daniel had just worked with her in Knives Out and really loved her and the part just suited her down to the ground. I’m glad that the films, within the Daniel Craig era, have become more serious and a thought-provoking experience – a reflection of what’s going on in society.

Are there any performances that have surprised you over the years or anyone who has surpassed your expectations?

Daniel Craig, I guess surpassed my expectations. He turned out alright didn’t he (laughs). He’s been brilliant.  I’ve always been a huge fan of Jeffrey Wright, he was great for the role of Felix. Similarly, Naomie Harris was just perfect for Moneypenny. Ben Whishaw has been a delight and that was definitely a Sam Mendes choice and that was unusual to cast somebody so much younger to play Q. But it works brilliantly. I think in the new tech age, it would make so much more sense that it’s a young guy. I think he’s been fantastic.

Comedian Hugh Dennis popped up in No Time To Die which people seem a little bit surprised by. So how did that come about?

Well, I knew Hugh anyway and obviously knowing that Phoebe Waller-Bridge liked him so much as well helped. It’s just always fun to have somebody slightly unexpected. There’s hardly an actor in the world who’s going to turn down a part in a James Bond film and it was a fun little part. I think he was very happy to do it. So it was a perfect combination of him being great, I like him, Phoebe Waller-Bridge liked him. Everybody else liked him. So why not?

You work alongside your great niece Jemima McWilliams now in casting?

Yes, Jemima’s my great niece. She used to come and help out in the holidays with her four sisters. She went off to university, worked in a theatrical agency for years and at Sony for a few years. Then she asked if she could come back and work with me again for a bit, so she did and never went away. I have to say it has been an absolute boon because she’s a genius and she can do all sorts of stuff with technology. We film all the auditions now and upload them to be viewed online. Also, she’s brilliant at coming up with new ideas. We’re a good combo and that’s so important.

What is it like working with Daniel Craig? Does he like to help in the casting of particular roles?

Daniel’s always interested to know who is being considered. On No Time To Die, he had a say in who was going to play his daughter. We did a very exhaustive search for her. We had three young girls come out to Pinewood Studios and he met each one individually and interacted with them to see who he felt was going to be the best. Young Lisa-Dorah Sonnet, she was just extraordinary and she was like a pro. I can’t really describe it any other way. She would just go on the set and she knew who everybody was, she knew what they did. She was five for goodness sake and you couldn’t keep her away. Nothing distracted her. That was the amazing thing. She wasn’t given very much dialogue to do but her eye contact was always absolutely spot on. Daniel felt she was a great choice too. Daniel is always there and he contributed in lots of different ways. He was very much part of the fabric of the whole process.

You are involved in the casting for the lead role? How is that process?

Yes, I am very much involved because I have to be aware of who’s around and who’s available. When Pierce couldn’t take on Bond due to Remington Steele, it was very unfortunate.  Pierce had a contract and they were going to release him from Remington Steele but on the very last day, they said no.  The casting of Daniel Craig was very unpopular in the press at the time. We did a huge search prior to casting him, including some very well-known actors. Thank goodness that Barbara Broccoli absolutely stood her ground on Daniel. He wasn’t an obvious choice but Barbara was his champion from the word go.

There will be a lot of interest in this casting process, so what does it entail?

Well, while a lot of people I meet would like to be James Bond, the first requirement is that you have to be a brilliant actor, first and foremost. It’s as simple as that. Once we have a shortlist they will be invited to meet. The process then normally involves a screentest. Historically, what we’ve always done is give them a scene from a previous film. I never use the script that’s going to be shot. The last time we did it, we did screen test quite a few people. It is a huge decision to pick someone as James Bond and it’s not one that can be taken lightly because there’s so much riding on it. It’s extraordinary how it changes when they’re in the suit and with the hair cut being put through the paces and all the rest of it. The biggest example to me, is not from this franchise, but the Superman films which is where I cut my teeth. Christopher Reeve just seemed like a totally regular guy when he was just sitting there in the room but put the Superman suit on and he turned into something else entirely. The same thing happens with Bond. You get the clobber on and you turn into something and that’s the magic. It requires an ability to act. The ability to be physical. The end result is that you have to be the full package.

Have you already started looking for the next James Bond?

No, not at all, No Time To Die is still playing in theatres and being released on DVD around the world – let’s enjoy this moment before moving on.