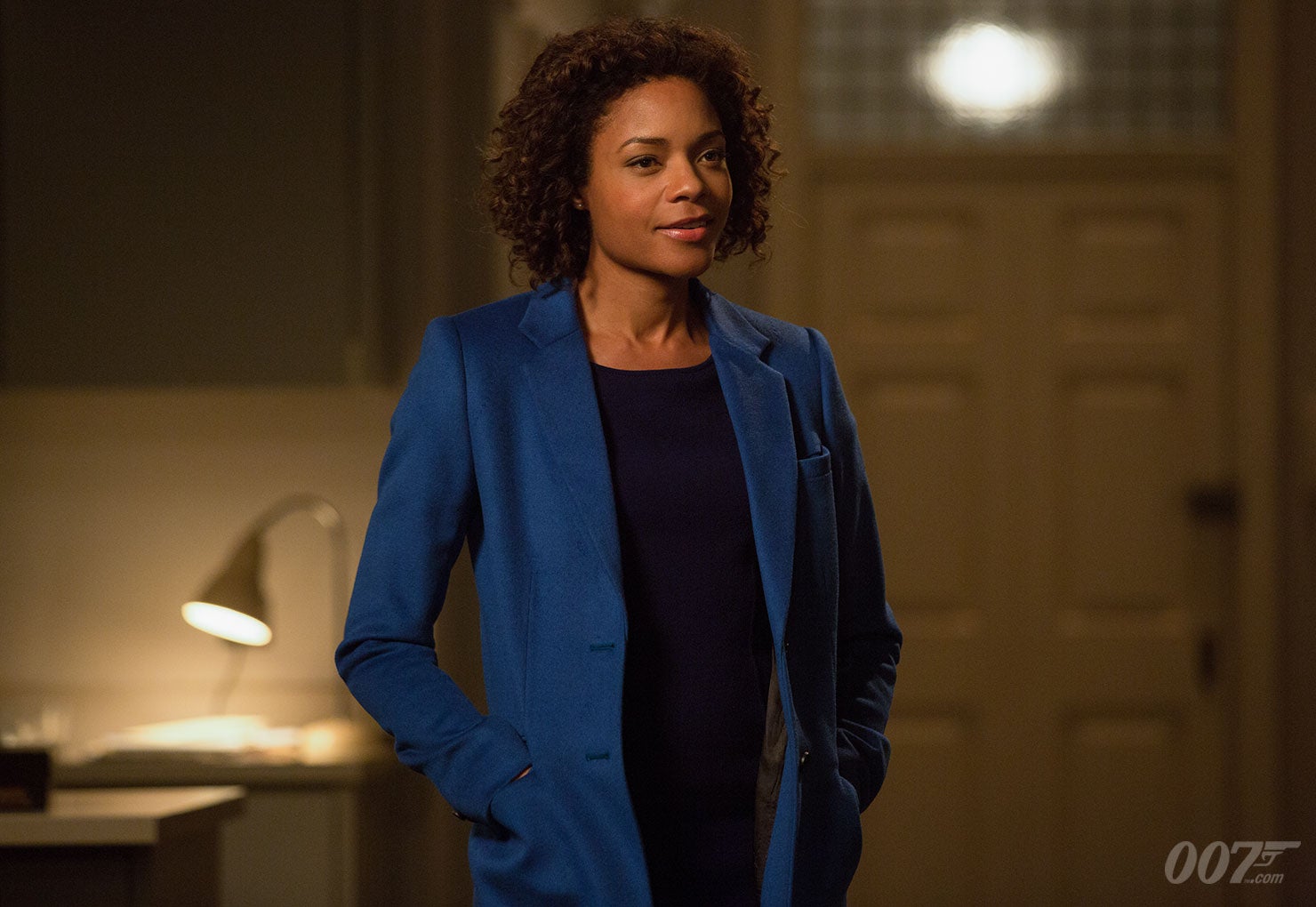 In Skyfall (2012), Miss Moneypenny, played by Naomie Harris, is reintroduced to the series as a field agent, Eve. For Naomie, Eve is “very independent, intelligent, very witty, fun, courageous. She’s a woman I admire and would like to be, but I don’t have half as much courage as she has.”

She firsts assists Bond on assignment in Istanbul, driving a Land Rover Defender in pursuit of mercenary Patrice, who has stolen a clandestine Mi6 hard drive. During the breakneck chase, Patrice leaps from a bridge onto a speeding train and Bond follows suit. As the train starts to disappear into a tunnel, Eve, armed with an assault rifle, is ordered by M to “take the shot” to stop Patrice escaping. Eve suggests she hasn’t got a clear view and might hit Bond. M insists she fires. Eve’s shot accidentally hits Bond and he plummets into a river as Patrice escapes.

For ‘killing’ Bond, Eve is temporarily suspended and begins assisting the Intelligence and Security Committee Chairman Gareth Mallory during the transition between M’s ‘voluntary retirement’ and her unnamed successor’s arrival. At Mallory’s request, Eve is sent to Macau to help Bond. She flirts with him during an intimate shave but offers more vital back up by knocking out one of Severine’s bodyguards saving Bond’s life. Eve is further in the thick of things when Silva attacks M’s Board Of Inquiry, firing off shots in the gun battle, also aiding the escape of key government officials.

Following M’s funeral, Eve presents Bond with a Royal Doulton British Bulldog bequeathed to Bond by M in her will. Eve informs Bond she is leaving fieldwork to assist the new M — Gareth Mallory. It’s only at this point she reveals her full name to Bond — “Moneypenny, Eve Moneypenny.”

In Spectre (2015), Moneypenny becomes one of Bond’s key allies, risking her career to help him by bringing him the package left to him by M and by informing 007 the true identity of ‘The Pale King’ as Mr. White, a former member of Quantum. Later, along with M, Q and Tanner, she plays a pivotal role in the plan to arrest Max Denbigh.

“What’s really great about Spectre is that their relationship has really developed and they’ve become a lot closer,” Naomie says of Moneypenny and 007. “They really trust each other.”