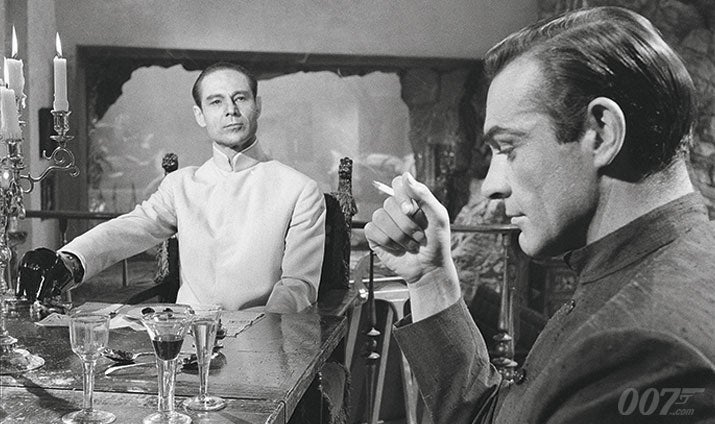 A scientific genius, Dr. No initiates a plan to sabotage American rocket launches from Cape Canaveral from his secret island base on the Caribbean island of Crab Key off the coast of Jamaica. He employs a nuclear reactor to create radio signals that interfere with the rockets’ gyroscopic controls.

In Dr. No’s own words, he is the “unwanted son of a German missionary and a Chinese girl of good family.” Becoming “treasurer of the most powerful criminal society in China,” he stole $10 million of their money and fled to the US. Shunned by the scientific communities in the East and West, Dr. No became a high-ranking operative in the terrorist organisation SPECTRE. His entire plan is driven by revenge against the East and West who rejected him: SPECTRE will not only determine who reaches the moon first but also decide which side will prevail in the Cold War.

Equipped with mechanical hands as a result of radiation experiments gone wrong, Dr. No considers himself one of the world’s leading experts in radiation power. Despite his intimidating appearance, he is also a man of culture, expertly mixing classical art (he owns Goya’s portrait of Wellington stolen in 1961) and antiques with modern design. Yet his exquisite taste belies a ruthless nature.

Dr. No rules by fear. On Crab Key, he keeps a small army of guards and a flame throwing swamp vehicle — painted to resemble a dragon — to scare off local interest. Metallurgist Professor Dent runs Dr. No’s criminal organisation in Jamaica deploying a clutch of associates including the Three Blind Mice killers, Mr Jones, a woman posing as a Daily Gleaner photographer and Miss Taro. Together, they keep an eye on Crab Key, taking note of anyone who takes too much interest in Dr. No’s organisation. This nefarious team is responsible for the death of secret service agent Commander John Strangeways, a murder that brings Bond to Jamaica to investigate.

When Bond and Honey Ryder are captured in Dr. No’s base, he initially treats them well hoping to convince 007 to join his organisation. Bond refuses — Dr. No dubs him a “stupid policeman” — and is incarcerated along with Honey. Dr. No prepares to topple the NASA moon launch, unaware that Bond has escaped and entered the nuclear reactor room disguised as a technician.  Bond overheats the reactor, forcing Dr. No to charge, the pair battling on the fuel elements carriage as it is lowered into the reactor pool. At the last moment, Bond knocks Dr. No into the pool, his metal hands unable to grip at the carriage as he boils to death in the bubbling water.