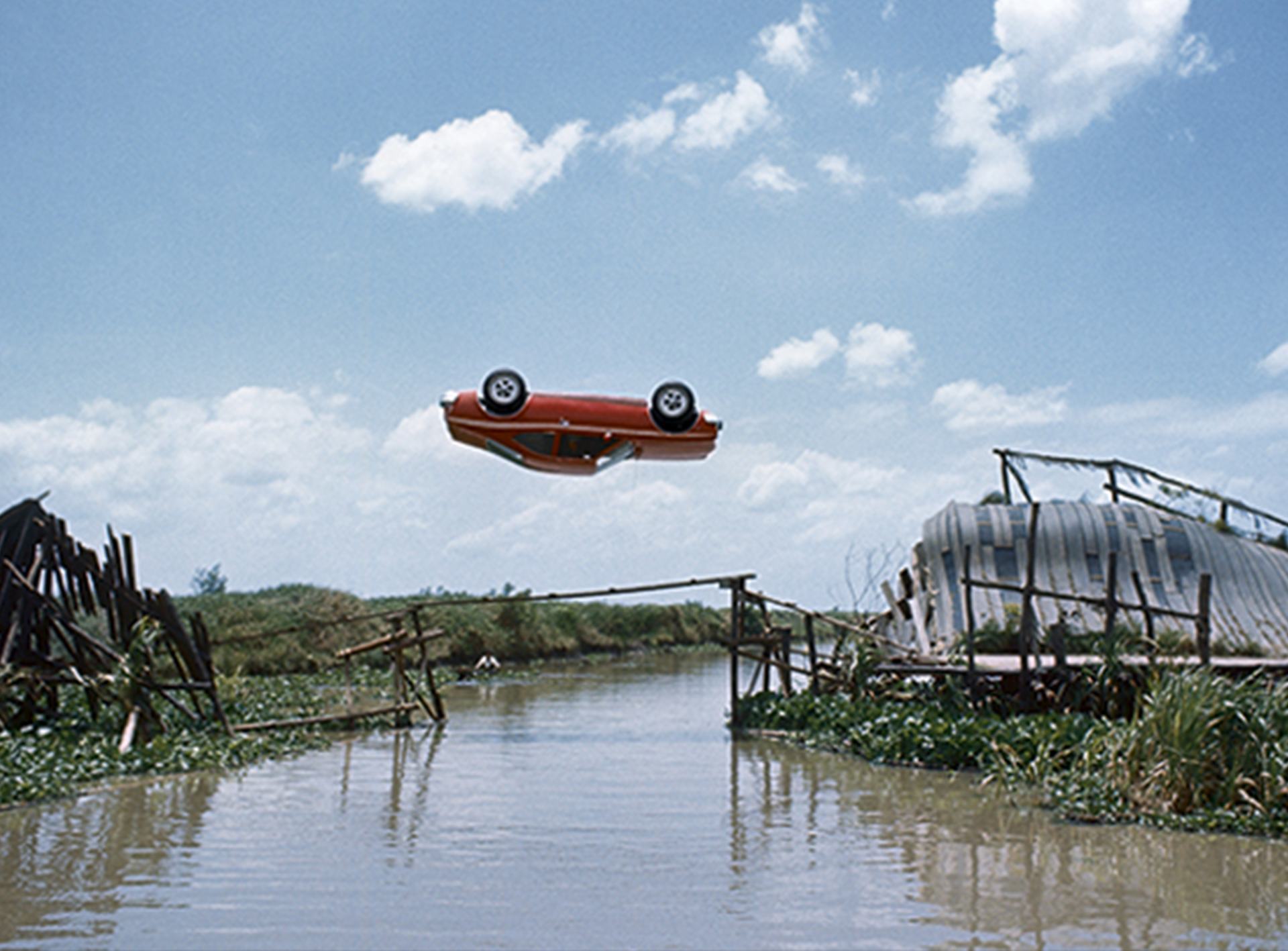 The corkscrew car jump in The Man With The Golden Gun (1974) is among the most spectacular stunts in the 007 series. In hot pursuit of Scaramanga (Christopher Lee) in Bangkok, Bond (Roger Moore) steals a red AMC Hornet from a car showroom, coincidentally with a vacationing Sheriff J.W. Pepper (Clifton James) from Live And Let Die (1973) in the passenger seat. During the chase, Bond and Pepper find themselves on the other side of a river forcing Bond to reverse and make a spectacular jump across the water spinning 360 degrees in mid air before landing safely on the other side.

The idea for the set-piece started when stunt driver Joie Chitwood (who worked on Live And Let Die) sent director Guy Hamilton a photograph of a car undertaking a corkscrew jump. The stunt, designed by Raymond McHenry on a computer inspired by his work on a simulation of single vehicle accidents, was part of The American Thrill Show, staged by JM Productions. The so called Astro Spiral Jump had wowed audiences all across the US and was now licenced to The Man With The Golden Gun team to immortalise on film.

Based on mathematical and computerised calculations provided by the Calspan Corporation in New York, the car had to be perfectly balanced so the driver and steering wheel are exactly in the middle. It also had to hit a curved ramp at exactly 48 miles per hour — two tachometers were on board to check this — meaning a long run up was essential.

On June 1 1974, day 35 of production, the crew, guided by stunt co-ordinator W.J. Milligan Jr, assembled on the canal at Klong Rangsit, Thailand. With the ramp disguised as a tumbledown bridge, the spiral jump was performed by Loren “Bumps” Willert in Bond’s AMC Hornet X Hatchback. Two dummies of Bond and Sheriff Pepper were positioned either side of Willert, who was dressed in black so he wouldn’t register on camera.

“The guy who did the roll had never driven the car before or ever done it,” recalled Guy Hamilton. “He wasn’t concerned because as long as it had the run up, so long as it’s 48 miles per hour, the rest is automatic. You hang on, cross your fingers, and bingo he did it in one take.”

Yet Willert didn’t just do the jump for the cameras; he also did it for an assembled crowd.

“Some people didn’t believe we actually did the stunts,” said marketing executive Hy Smith. “We took about 100 press from Europe in a rented 747 to Thailand. Despite that they saw the car corkscrew 360 degrees from one side of the river to the other, when the picture came out, many of them said it was the most wonderful special effect they’d ever seen.”But the courageous act that wasn’t lost on the star. After witnessing the astonishing jump, Roger Moore told the stunt team: “You fellas make me look good.”