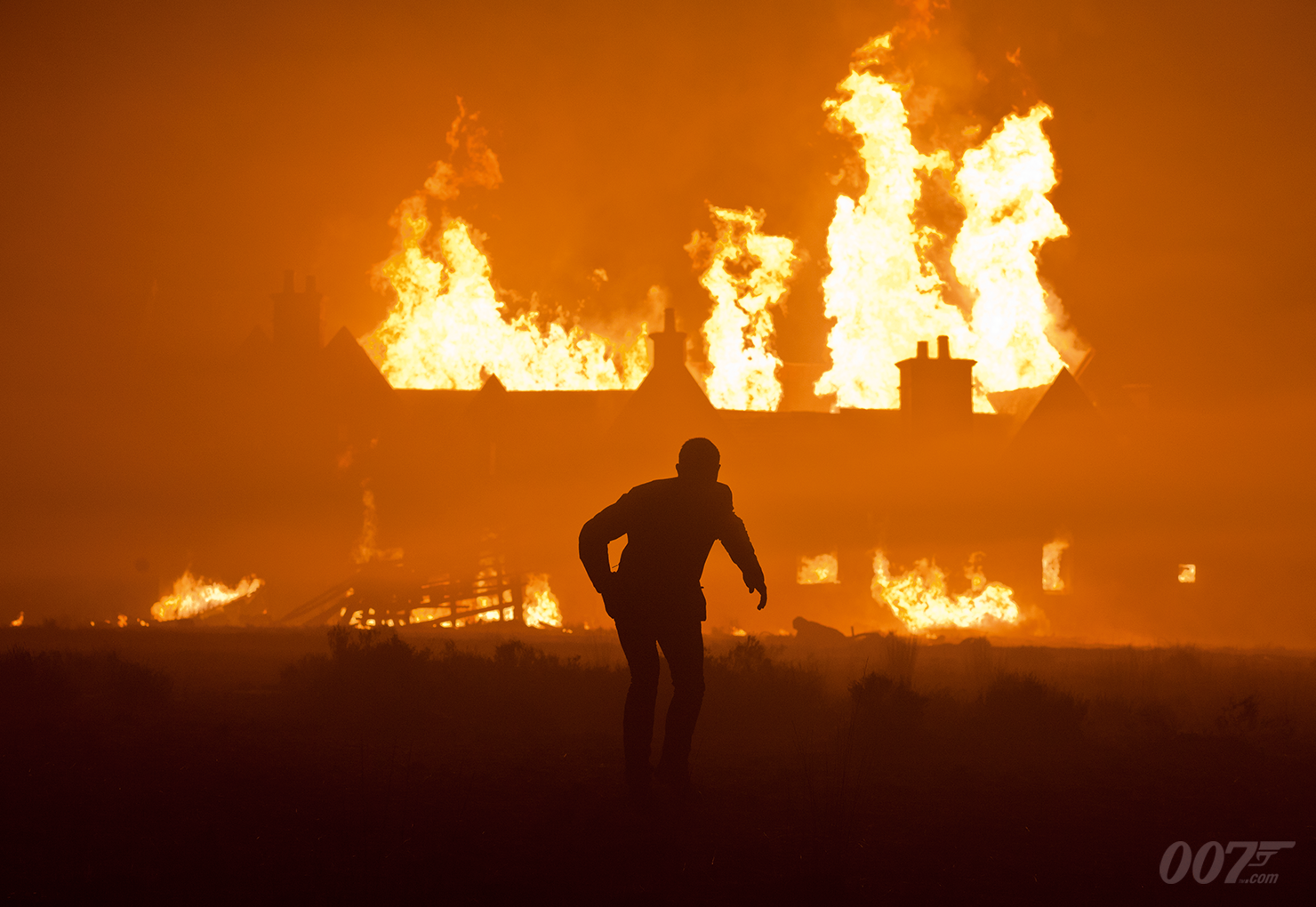 The finale of Skyfall (2012) represented a different kind of ending for a James Bond film, still full of exciting action but also under-pinned by something more personal and intimate. After Bond (Daniel Craig) rescues M (Judi Dench) from the attack by Silva (Javier Bardem) at the board of inquiry, 007 needs to find a place off the grid to take on the cyberterrorist on a more even footing. With Q (Ben Whishaw) leaving digital breadcrumbs for Silva to follow, Bond and M head north to Bond’s old family home, Skyfall, in Scotland. With the help of gamekeeper Kincade (Albert Finney) and M, Bond defends Skyfall when Silva and his men come for M.

“We wanted to make the third act more emotional for Bond and raise the stakes for him,” said producer Barbara Broccoli. “What better way than to go back to the last place on earth that he wants to go to, the most painful place for him, the place he grew up, the place where he heard his parents had been killed.”

The sequences of Bond and M heading North in the Aston Martin DB5 were shot in Glencoe in February 2012, with Skyfall’s interiors recreated at Pinewood. For the exteriors of Bond’s ancestral home, the filmmakers chose Hankley Common in Surrey where special effects and miniature effects supervisor Chris Corbould led a splinter crew to create the action, explosions and destruction of the house.

With the help of his DB5 and his father’s shotgun, Bond sees off a ground attack but is caught unawares when Silva appears in an AW101 helicopter that strafes the house and blows out every single window.

“I was anxious to get the biggest calibre gun on the helicopter I could so I got a 50-calibre gun,” remembered Corbould. “We spent a lot of time getting really big bullet hits coming through the walls — they literally take one wall apart.”

“For the helicopter crashing into Skyfall, we both felt we’d get a lot more realism out of it by filming it as a miniature rather than as CG,” said Corbould. “We built a third scale model of the house and two-third-scale models of the helicopter. We put the helicopter on a hydraulic rig that we programmed to give us a lifelike movement as it crashed into the house.”

The scene was devised with two explosions. A small explosion that creates debris which knocks the helicopter off course and sends it careening into the house. The fuel tanks then ignite, causing a massive second explosion. “We used 150 stacks of dynamite and a couple of hundred gallons of fuel for that one,” said Corbould proudly.

If the explosion is the finale of the spectacular action, the emotional climax comes with Bond’s confrontation with Silva and the subsequent death of M from wounds sustained in the attack.

“When I found out M was going to die, I said to Sam and Barbara, ‘Of course, she’s got to go, with a bang and a good script,’” recalled Dench.

For Daniel Craig, the death scene finally acknowledged something that had always been present but never fullyexpressed in the Bond-M relationship.

“That was very emotional,” he said about the scene. “We joked most of the day but it was actually very tough to do because Judi had been part of Bond for 17 years. In the end, during the scene Bond and M genuinely connect and show weakness to each other for the first time.”

To discover more about Skyfall’s explosive ending then visit the Spyscape exhibition in New York where there is a whole room dedicated to how the sequence was put together.