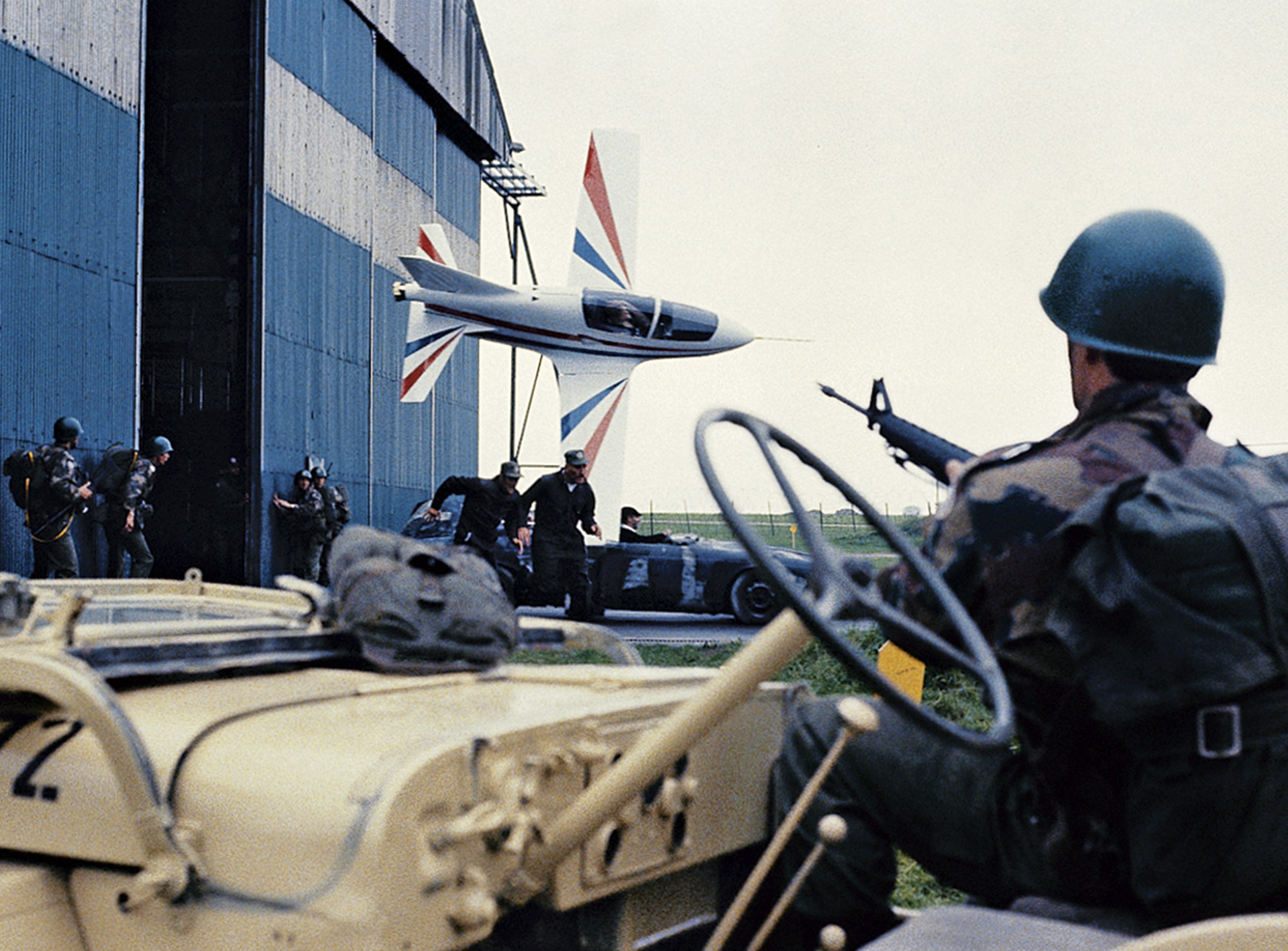 The Acrostar “Bede” Jet made a stunning appearance at the opening of Octopussy (1983) to help Bond (Roger Moore) escape from an unidentified Latin American country. Invented by Jim Bede, the BD-5J Acrostar Microjet is just 3.6 metres (12ft) long with a wingspan of only 3.9 metres (13ft), powered by a single TRS-18 microturbo jet engine capable of a top speed of 514 kph (320 mph).  Obtained and weaponised by Q Branch, it’s a nifty plane that gets Bond out of an impossibly tight scrape.

Bond is on a mission to sabotage a spy plane impersonating moustachioed army officer Colonel Toro. Unmasked and captured, 007 is transported in an army vehicle but gives his guards the slip by pulling the parachutes on his captors, then jumping into a Range Rover convertible driven by colleague Bianca (Tina Hudson). Bond detaches the horse box at the back of the convertible and climbs in. As swarms of army jeeps and motorcycles head towards him, 007 emerges from the trailer in the Acrostar Jet. The folding wings descend and Bond speeds towards the vehicles, taking off just over his pursuers head.

A Rapier surface to air missile is launched at the jet and Bond tries to lose it by flying through a series of ravines and mesas. In a last resort, he decides to fly straight into the hangar housing the spy planes. Colonel Toro’s men scamper to close the huge doors at the far end but Bond’s plane zips through the ever diminishing gap. The pursuing missile smashes into the closed door obliterating the hangar and completing 007’s mission.

In the clear, Bond notices that the jet’s fuel gauge registers almost empty. He lands the plane on a deserted road, pulls into a petrol station and coolly asks the astonished attendant: “Fill her up”.

Shooting the sequence was divided into two sections. To capture the aerial action, stunt pilot J.W. “Corkey” Fornof flew his jet over Southern Utah. For close-ups of the heart-stopping moment Bond manoeuvres the jet through a hangar, special effects supervisor John Richardson mounted a plane on a pole attached to a stripped-down Jaguar. The car was driven through the hangar at breakneck speed, soldiers running in front of the car to hide the chassis. To create the effect of the missile following the plane, Richardson constructed a model plane and attached a flaming firework to it. Simple, but highly effective.