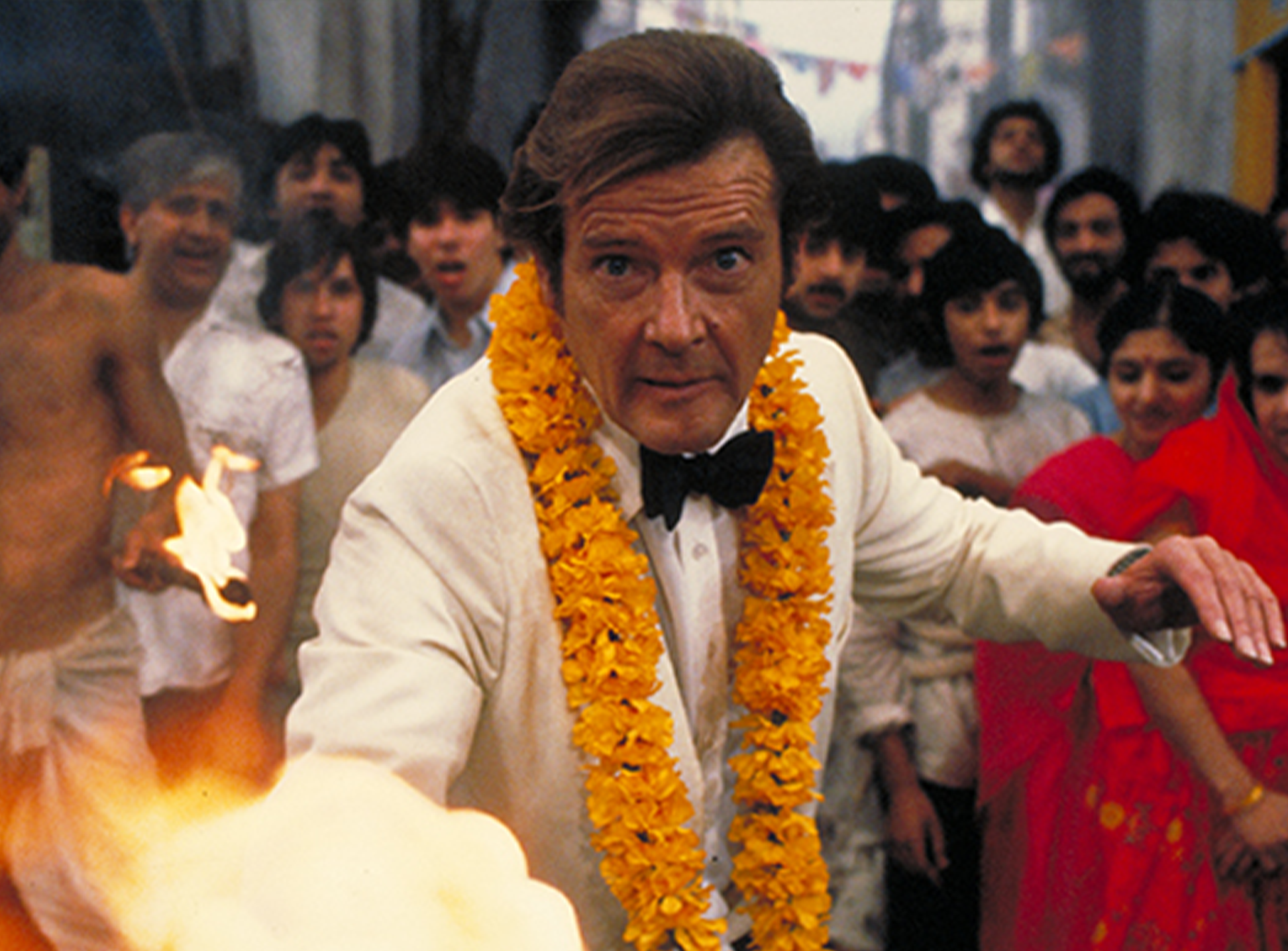 Octopussy, the 13THfilm in the official EON James Bond series, takes its title from a 1966 Ian Fleming short story collection but the plot is completely original. Regular writers Richard Maibaum and Michael G. Wilson retooled George MacDonald Fraser’s early draft of the script retaining some  of colourful elements including India as a locale, a deadly yo-yo buzzsaw and Bond evading capture by hiding in a gorilla suit.

The final story sees Bond investigate the murder of 009 (Andy Bradford), found dead dressed as a clown and carrying a fake Fabergé egg at the British Ambassador’s residence in East Berlin. At an auction, Bond encourages Afghan prince Kamal Khan (Louis Jourdan) accompanied by his henchwoman Magda (Kristina Wayborn), to bid for the fake collectible egg. The trail leads 007 to Khan’s palace in Rajasthan, India, where Bond discovers the corrupt art dealer is in league with Orlov (Steven Berkoff), a maverick Soviet general. The pair are using the circus troupe of Khan’s mistress Octopussy (Maud Adams) to smuggle Soviet art treasures into the West. 007 infiltrates the circus and discovers Orlov has replaced the art with a nuclear warhead, intending to blow up a US Air Force base in West Germany. Bond deactivates the device and leads an assault on Khan’s palace. After a spectacular battle, Khan kidnaps Octopussy and makes his escape by plane, only to be foiled by Bond who detaches the fuel line and sends Khan to a fiery end.

The pre-title sequence sees Bond escape in an Acrostar Bede jet hidden in a horse box. Having previously appeared in early drafts of the Moonraker script, the stunt was divided into two sections. For the aerial action J.W. “Corkey” Fornoff piloted his jet over Southern Utah. For close-ups of the heart-stopping moment Bond manoeuvres the jet through a hangar, special effects supervisor John Richardson mounted a plane on a pole attached to a stripped-down Jaguar. The car was driven through the hangar at breakneck speed, soldiers running in front of the car to hide the chassis. To create the effect of the missile following the plane, Richardson constructed a model plane and attached a flaming firework to it.

The first unit started shooting on Aug 10 1982 in West Berlin — Peter Lamont doctored a section of the graffiti-covered Berlin Wall to represent the East Berlin side — and moved to Udaipur in September. The filming of the tuk-tuk chase drew huge crowds. At one moment, a man broke through the security cordon on a bicycle and joined the chase – the moment remains in the film. The district’s Maharana was incredibly welcoming to the team, not only letting the safari scenes be filmed in his garden, but also lending his stuffed tiger for the moment Bond is attacked in the jungle.

The score was once again composed by John Barry. Collaborating with celebrated lyricist Tim Rice, the pair created six songs for consideration. ‘All Time High’ was chosen, a rare 007 song not to feature the title of the movie, performed by US soul singer Rita Coolidge. The film premiered in June 1983.