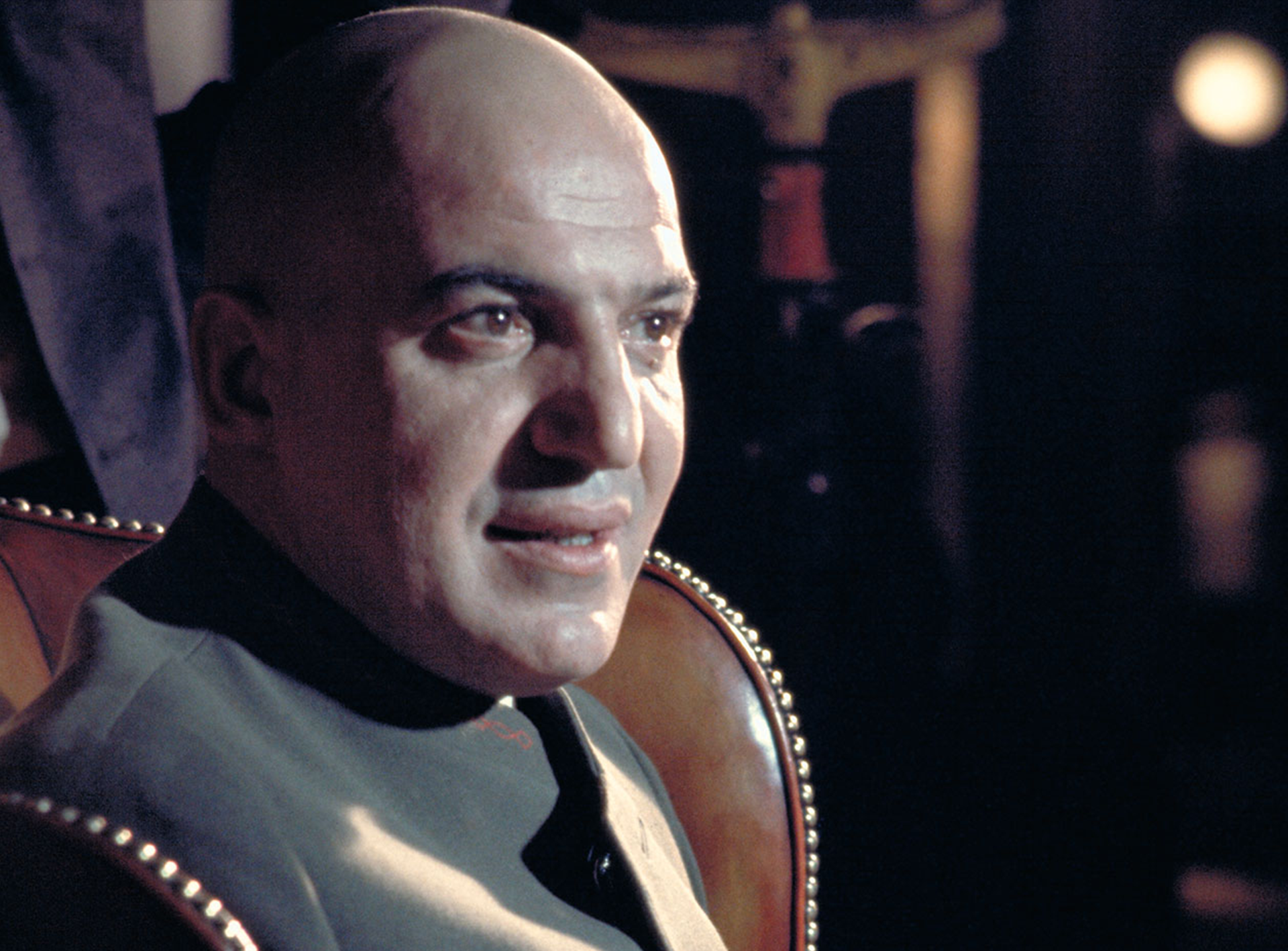 Ernst Stavro Blofeld (Telly Savalas) in On Her Majesty’s Secret Service (1969), is a more physically robust presence. Adding to his brilliant criminal mind, he confidently fights, skis and chases 007 down a bobsled track. This mixture of intellect and aggression makes him one of toughest tests Bond (George Lazenby) has ever faced.

Posing as foppish genealogist Sir Hilary Bray, Bond infiltrates Blofeld’s clinical institute at Piz Gloria, an Alp in Switzerland, under the guise of verifying Blofeld’s claim to the title ‘Comte Balthazar de Bleuchamp’ – de Bleuchamp being the French form of the Blofeld surname. On arrival, Bond is greeted by 12 beautiful young women from all over the world. They are patients of the institute’s clinic, superficially undergoing unorthodox psychological treatments for food allergies and phobias. In fact, Blofeld is brainwashing the women to unwittingly spread a biological agent to globally render livestock and crops infertile if his demands are not met— collectively they are Blofeld’s Angels Of Death.

Blofeld’s henchwoman Irma Bunt (Ilse Steppat) captures him on a visit to the bedroom of one of the ‘Angels’. Bond escapes imprisonment and is chased by Blofeld and his enforcers on skis. Bond, meeting up with his lover Tracy (Diana Rigg), evades his captors until the following morning when Blofeld creates an avalanche, sacrificing some of his own men and capturing Tracy. Bond is buried under the snow, but manages to escape.

Blofeld holds the world to ransom with the threat of destroying its agriculture via his deadly Virus Omega. His price is amnesty for all past crimes and recognition of his ‘Comte Balthazar de Bleuchamp’ title. While the Prime Minister deems an assault on Piz Gloria too dangerous, Bond realises a smaller scale attack on Piz Gloria’s radio complex will foil Blofeld’s plot. Bond contacts crime boss and future father-in-law Draco (Gabrielle Ferzetti) to arrange a raid by helicopter to destroy the facility and rescue Tracy.

As Piz Gloria is destroyed by Draco’s attack team, Blofeld escapes in a bobsled with Bond giving chase. Bond leaps onto Blofeld’s bobsled after his own vehicle is destroyed by a hand grenade. In the ensuing fist fight, Blofeld is snared by the neck in overhanging tree branches, ripping him out of the bobsled and seemingly killing him.

Yet it is not the last of Blofeld. Following Bond’s marriage to Tracy in Portugal, the happy couple stop to remove wedding decorations from their car. A silver Mercedes sedan driven by Blofeld, now in a neck brace, drives past; Irma Bunt leans out of a rear window with a machine gun and shoots Tracy, killing her instantly. Blofeld speeds off to fight another day.