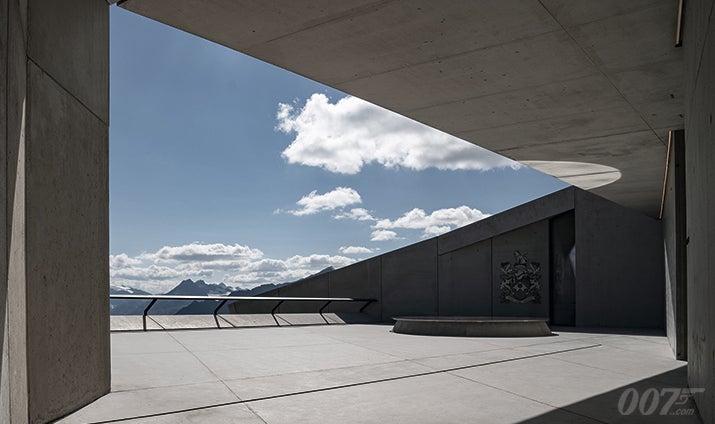 Built 3,048 metres above sea level inside the summit of the Gaislachkogl Mountain in Sölden, Austria, 007 ELEMENTS is the ultimate celebration of James Bond. Housed in a striking architectural structure, each of the galleries explores a key element from the series, from music to characters, to glamorous locations, gadgets, and action sequences.

The concept was designed by Creative Director Neal Callow (Art Director on Casino Royale, Quantum Of Solace, Skyfall and Spectre) together with the team at Optimist Inc. lead by Tino Schaedler. Callow and Schaedler collaborated with Obermoser Architects to create the bespoke structure the installation is housed in; a large futuristic space built into the side of a mountain. With the angular architecture of the open-air Plaza, and the use of concrete, steel and glass, it is an homage to legendary 007 production designer Sir Ken Adam. The immersive James Bond experience invites visitors into the world of 007 and reveals how that world is made.

The location was a key backdrop for Spectre (2015). Just metres away lies the impressive futuristic glass restaurant ice Q, which became the Hoffler Klinik, the private clinic where LéaSeydoux’s Madeleine Swann works as a psychologist. The winding glacier road where the unique mountain chase was set in the film involving an aeroplane and 4x4s can be seen from the large windows in the exhibition.

Visitors pass through the entrance to the installation and into The Barrel of the Gun which shows a unique cut of the Spectre title sequence. They then emerge onto the open-air Plaza with spectacular views across the Tyrolean Alps. The Lobby resembles the type of antechamber found in a villain’s lair and an exclusive film, narrated by Skyfall and Spectre director Sam Mendes, reveals the history of the franchise. Visitors then move into the Lair, where a larger-than-life film highlights the iconic characters from the series.

In the cylindrical Briefing Room, Naomie Harris, who plays Moneypenny in Spectre and Skyfall, narrates an insightful film about the way screenwriting, locations and set design influence each other throughout the series, with a special focus, on Spectre’s Austrian sequences.

The Tech Lab includes interactive bays relating to Spectre and other Bond films. Visitors can scan their arm and create a secret agent ID, and see legacy props such as the Snooper Dog from A View To A Kill (1985) and the golden gun from The Man With The Golden Gun (1974). The spectacular mountain chase sequence from Spectre is explored further in the Action Hall. The front portion of the BN-2 Islander plane that Bond gives chase in before crashing through a barn is on display, along with detailed models showing how the scene was shot. A state-of-the-art screening room shows the actual snow chase sequence from Spectre which visitors can watch with a deeper understanding of how it was created.

007 ELEMENTS is accessed via the Gaislachkoglbahn Gondola in the resort village of Sölden. Open daily from 09:00 to 15:30, tickets are available online or from the Bergbahnen Sölden ticket offices and cost €22 for adults, €12 for children. For further information or to book tickets, please visit: 007elements.com